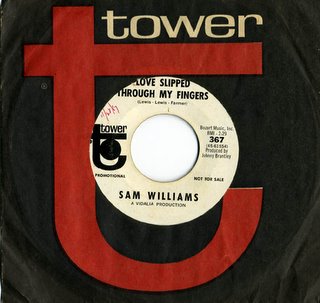 Back to Johnny Brantley productions!

I have not been able to discover any biographical information on Sam Williams. He has a strong distinctive voice which seems to be a common thread to all the artists who worked with Johnny Brantley. It is shame that he only had 2 releases.

Tower 367 Love Slipped Through My Fingers/Let's Talk It Over

One of the most famous Johnny Brantley productions because of its popularity on the UK Northern Soul scene since the late 70's. It also was also released on UK Grapevine by John Anderson and has appeared on several Northern Soul CD compilations. Love starts with one of the most memorable openings ever - a tinkling of the piano before the drums roll and the horns wind up and Sam comes in with the girls screaming in the background. It is all held together with a wall of pure sound plenty of echoing piano and tambourine. Those backing singers wonderfully offset one of the purest Northern Soul sides ever and perhaps the best songs Lewis, Farmer and Lewis ever wrote.

Then there is the B-side penned by Sam himself - this is Sam Williams meets Hermon Hitson! Johnny must have enjoyed raw emotion because Sam sings himself hoarse! As ever with Johhny he gets the band to lay down a nice thick horn/organ backdrop for Sam to work over.

These are 2 Jimmy Norman songs which as yet I have not heard. I understand that So Called Friend has the same backing track as Billy La Mont with Sam's vocals dubbed on. Later, Johnny took the vocals off and faked them as Hendrix tracks.