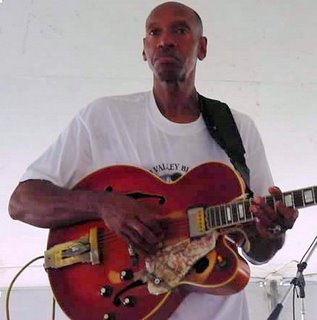 Following on from the previous post on Roy Hytower; he had several other good hard soul 4s as follows:

The Expo 45 was also released after the Brainstorm version and is either a different mix with chorus or a re-recording. Roy also recorded an album in 1988 called "Root Doctor" for Diamond Gem.

I have been trying to find an article on Roy in one of the blues magazines such as Living Blues but cannot find one which surprises me other than one in a Finnish magazine from the early 90's.

Roy was born in Coffeyville, Alabama in 1943 and began working in Mobile clubs in his teens. He moved up to Chicago sometime in the 1962 and replaced Mighty Joe Young in Otis Rush's band. Roy must have hooked up at some stage with Bill Lasley because he recorded for Avin which I think was a subsidary of Lasey's Celtex set up.

Robert Pruter states in "Chicago Soul" that Roy's career was interrupted by the draft and he ended up seeing action in Vietnam before returning to Chicago to record for Leo Austell and Archie Russell's Brainstorm label.

Roy carved out a career in musicals and featured in shows playing Muddy Waters and Otis Redding before re-activating his career in 1988 with the "Root Doctor" album. Roy became a regular on the US blues festival circuit with his band Motif before re-inventing himself as Doktu Rhute Muuzic.

He still performs around Chicago today and has been involved with projects to introduce young students to blues music in Chicago. He has also appeared in several movies as well.

You can also catch him on DVD in a show headlined as Junior Wells and Friends on which he performs 4 songs with Pistol Pete.

One intriguing thing I found on a search of the Net for sides by him threw up a company called Vinyl Revolution who seem to specialise in selling single tracks on CD. The 4 tracks are "If Loving You Is Wrong", "Soulful Love", "United" and "People Get Ready". Anyone know where they come from? They are definitely not from his "Root Doctor" album.
Posted by Keeping Soul Alive at 12:57 PM