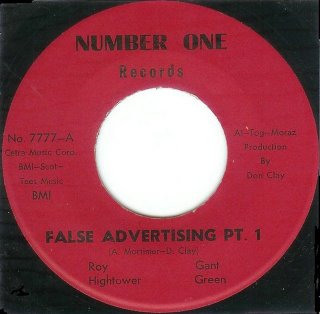 This blog has often been inspired by discussions on various forums and this post on Roy Hytower was inspired by a recent discussion on Soul Talk.

"False Advertising" was a new 45 to me when I picked it up off Ebay last year on the strength of his other 45s. It reminds me of a Johnny Guitar Watson & Larry Williams side put through a deep Chicago funky mix!!! Azie Mortimer who wrote the side also had releases on the label and the song runs through a whole series of references to other soul sides. The A-side is a kind of build up to the B-sides which has better singing in a Sam & Dave type bag and has more chord changes than the repetitive A-side.

I really like Roy Hytower's vocals - he has a deep bluesy voice and is up there with the likes of Johnny Sayles - it is just ashamed he didn't record more. I don't know anything about Gant Green??

I am sure I will post something more on Roy soon!!!

Posted by Keeping Soul Alive at 11:28 AM