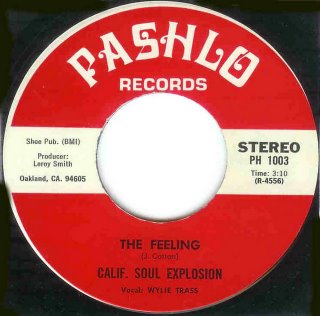 I still find it hard to stop myself buying 45's even though I have them on CD!!! What's new with that you say for a collector of some many years who still needs to get his fix!!! My argument is that the b-side is not on the CD which I think is valid.

Anyway this killer appeared on Luv N' Haight's first Bay Area Funk CD. Wylie Trass was the other half of the Casanova 11 with Freddie Hughes and still performs around the Bay Area to this day. "The Feeling" is a cooking number waiting to blow your speakers apart backed by a gritty version of "Chain Of Fools" which I love.

Thanks to Mark at Resolution Records for that one!!
Posted by Keeping Soul Alive at 4:27 PM