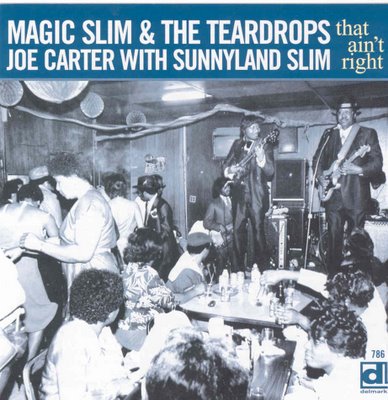 Delmark have just released another exciting CD in their Ralph Bass Produces Series by Magic Slim.

Here is the Delmark press release:-

Magic Slim and his Teardrops have been slaying blues crowds for over 30 years with his distinctive monstrous raunchy guitar tone and shimmering vibrato. Slim excites his diehard fans all over the world with his vast song repetoire of slammin' and scufflin' Chicago blues. Hear a young Slim and his brothers tear it up in this studio session from 1977, never released before on CD!

Slim's version of Muddy's "Just To Be With You" is powerful, ad still a highlight of his current shows. Slim deftly pulls out the obscure blues nugget of despair "Cummins Prison Farm" from the presently incarcerated Calvin Leavy( talk about truth in song the foreshadowing blues!). Check out vintage Slim on his slinky instrumental "Soul Blues".
Posted by Keeping Soul Alive at 12:31 PM