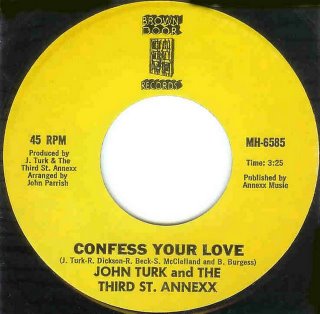 Why do certain 45s elude you? Sometimes it is actually sourcing them and no matter how much you dig they never turn up. Other times it is cost and other times with me it is priorities which is in the main back to cost and budget!!!

Why do I mention the above? Back in 1976, I was searching out obscure new releases especially from the West Coast. I had become interested in the Brown Door label because I had just bought a 45 by Marvin Holmes called "You Better Keep Her" and was trying to turn up anything on the label.

One day in 76, I get a list off a guy from Oldham(UK) who was then a big collector of new releases which had the above listed along with a load of other mouth watering sides. I had to wait until later that night when I got back from work before I could call him up - no email or mobiles then!!! I can still hear him saying "Sorry mate! 2 guys from Todmorden(UK) have just been around and bought the lot!" Those 2 guys were Jan Barker and Tim Brown - 2 well known UK collectors and in Tim's case now record dealer and DJ extraordinaire!!! That was my first introduction to them and since then they have become firm friends though back on that cold evening in 76 I was cursing them!!!

From that day on, the John Turk 45 just eluded me until recently for some reason nor had I had chance to hear it either. However, I recently changed my priorities after being giving a contact for John by Larry Vann and I thought it was time to track a copy down before I spoke to him about his part in the Bay Area music scene.

The side I have been playing is the above which has a lovely feel with complex rhythms and distinctive chord changes but it is the vocal which is a killer - I need to find out who this is - I am not sure whether it is John himself or someone in the band.

I will be back with more details when I eventually speak to John.
Posted by Keeping Soul Alive at 4:34 PM