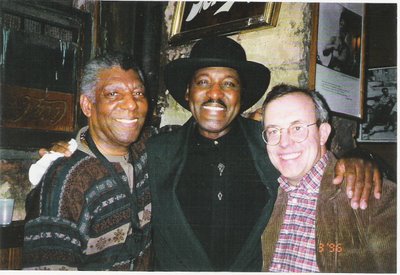 Gene Barge, Billy McGregor & John Marriot Chicago 1996
Last month I featured Billy McGregor and my old friend John Marriot commented that he had met Billy. John has beeen back in touch with the above photo and here is what he had to say about meeting Billy:-
"I met Billy in Chicago when he was with The Rhythm @ Blues All Stars (the old Mellow Fellows) group with Gene Barge on sax in the mid 90's.
It was about 2 in the morning. It was my last day in Chicago after 2 weeks working and had been taken out at lunchtime to a Japanese restaurant up in Schaumburg. I'd had enough to drink when I left mid afternoon but went off downtown for more records and around various places in the evening - spend 3 hours in Ko Ko Taylors waiting for her to show . She didn't! so after going elsewhere turned up in Blue Chicago and they came on. Very very nice surprise as he was surprised that somebody knew his old stuff!"