Home Of The Groove & Lionel Robinson 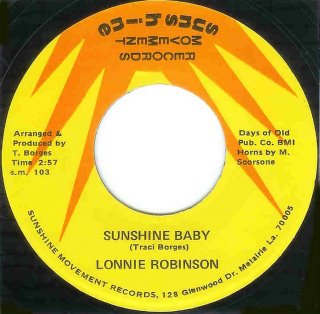 For me, 2006 has certainly been the year of the soul blogs. As I said some posts ago, while talking about James Rivers, I have found out more about soul music emanating from blogs than from anywhere else in recent times.

One of the blogs which I frequently visit is Dan Philip's Home Of The Groove which is the first port of call for anything New Orleans.

One recent post on Home Of the Groove was on Lionel Robinson aka Lonnie Robinson. Dan provided in depth look at Lionels' Knight 45 "Baby Let Me Do My thing" and had new information on Lionel which was new to me including a discography. However, one side which was missing was the above and that is why I dug it out to scan.

"Sunshine Baby" was issued circa 1975/76 and is a very old fashioned sing a long type dancer which has had a few plays on the Northern Soul scene in the UK. The B-side is a nice ballad called “Are You Sure You Want To Give Me Your Love” which was written by Johnny Angel who covered the record on Watch. I do not think that this Watch label was linked to the 60’s one, which was owned by Joe Assunto and Henry Hildebrand and had releases by Johnny Adams, Benny Spellman and others.

I don’t know any other releases by Johnny Angel and I don’t he is the same person as the veteran West Coast artist with the same name or another guy who plays in New Orleans with a band called The Swinging Demons. The song was recorded at the Knight Studios owned by the veteran New Orleans producer Traci Borges in the Old Metairie district who also produced both sides. Traci Borges worked with Lionel on his Knight 45's.
Posted by Keeping Soul Alive at 4:25 PM