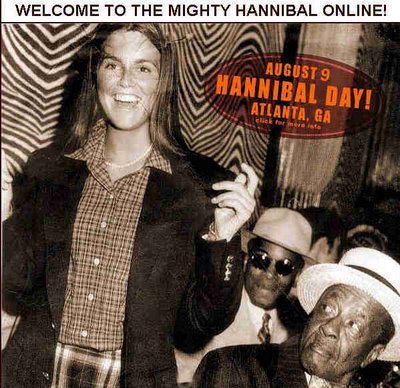 I was informed by Mr Fine Wine that The Mighty Hannibal has now got his own website.

Please drop by his site and support one of the truly innovative soul artists who is still living. The man is a true pioneer of soul music from the early days of R&B in the 50's and who has produced some memorable songs such as "Hymn No5" his anti-Vietnam War 45 or his bitter drugs song "Party Life" on his critically acclaimed 1973 Aware album "Truth".

Hannibal was also responsible for producing many fine Atlanta soul sides in the 60s and 70's by Delia Gartrell, Calvin Arnold, Hermon Hitson etc and was a bastion of the Atlanta soul music for most tof the 60's and 70's. His role in the development of the Atlanta music scene has now been recognised and he is to be honoured by his home town on August 9th.

You can also buy 2 CDs direct from Hannibal; a Norton Records compilation "Hannibalism" which features many sides from his long career and a second CD called "Who Told You That?" which features Stop America From Crak'in Up! with Hip Hop Pop) which was originally issued on Shurefine Gospel Record Co. in 1998

Earlier this year, I had several long conversations with Hannibal and this will form the basis of a comprehensive overview of his career to be published later in the year in a leading UK soul magazine.

Hannibal continues to perform in the New York area to rave reviews and I wish some enterprising European promoter would get him over here to perform. You can hear Hannibal singing live on Norton Records CD Get In The Groove.
Posted by Keeping Soul Alive at 11:31 AM