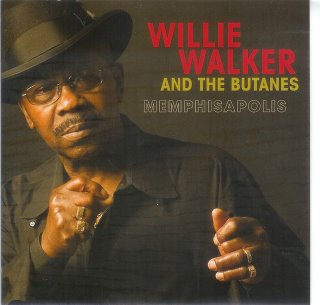 One of the highlights of my involvement in music was hooking up with Willie and the Butanes and in particular with Curt Obeda, the leader of the Butanes. Our collaboration back in 2003 led to release of the Right Where I Belong CD which was critically acclaimed.

The acid test for any artist is can you follow up such a highly acclaimed album? Well the answer is YES!!! In fact, though this CD takes off from the last one. I would say that Curt has enhanced his production techniques and Willie's vocals sound even better!! One reason for that is that during the recording of the "Right Where I Belong" CD, Willie's voice was suffering with the harsh Minneapolis winter!!!

I will review this CD in depth soon. However, I have waited too long already to highly recommend it to everyone who reads this blog seeing I have had a copy for over a week! OK - I may be biased because of my past involvement with the guys but 2 things which drew me to investing in the last CD are here again - Willie's voice and Curt's songs both of which make this CD album of the year already - no one surpassed them in 2004 and they are back in 2006 with an album which is going to be hard for anyone to beat again.

I will do a full review soon - but listen just get a copy!! If you bought the last one you will not be disappointed and for any lovers of Southern Soul - it isn't dead it just doesn't surface too often but Willie and the Butanes continue to keep the sound alive!

If you want to buy a copy then check out these sources:-

Or direct from Curt Obeda

Back soon with the review and details of a Willie Walker blog I have set up which is long overdue but I thought I would coincide the launch of the new blog with the latest CD.
Posted by Keeping Soul Alive at 4:35 PM