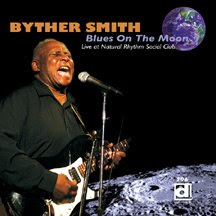 Kevin Johnson of Delmark Records has let me know of their latest release:

"Byther Smith's blues is dark, brooding, and often unsettling. He writes songs by tapping his unconscious mind rather than carefully crafting an idea that's on his mind at the moment. "Blues On The Moon" is a live album, available both on CD and DVD, that offers Byther's actual show in Chicago. On some of his out-of-town shows, Smitty uses pick-up bands, and he does blues standards, not his own songs. This album offers the real Byther Smith, with all of his rough edges and contradictions. It's passionate, and politically incorrect, and not for everyone, but it is deep blues from a man's soul, unfiltered by polite sensibility."

"The drone-framed, pleading 'Give Up My Life" is a harrowing, gospel-oriented effort that strains with emotional intensity while the autobiographical "Monticello" (Smith was born in Monticello, Mississippi) is a brooding 'searching for my baby' saga with Smith's legendary vocal delivery recalling Bobby "Blue" Bland in his early Duke days and the driving "Hard Times" has a sweat-dripping Smith shouting at the top of his lungs about the travails of a bluesman's life on the road." - Gary von Tersch, Blues & Rhythm, Sept. 2008
Posted by Keeping Soul Alive at 4:31 PM