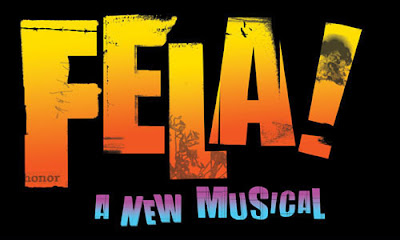 Just had a message in from the Antibalas guys:

For a limited time catch members of Antibalas perform the music of Fela Kuti!

Ruth & Stephen Hendel and Roy Gabay present the world premiere of Fela!, a new musical based on the life of groundbreaking African composer, performer and activist Fela Anikulapo Kuti. Directed and choreographed by Tony® Award winner Bill T. Jones (Spring Awakening) with a book by Jim Lewis and Bill T. Jones, Fela!will feature Kuti’s rousing music performed live onstage by Antibalas and other members of the New York Afrobeat community. This limited Off-Broadway run will begin performances at 37 Arts (450 West 37th Street @ 10th Avenue) on Tuesday, August 5 and play through September 21. The official opening is set for Thursday, September 4. Tickets can be purchased online at www.Ticketmaster.com or by calling the 37 Arts box office at (212) 560-8912.

In this new musical, directed and choreographed by Tony® Award winner Bill T. Jones with a book by Jim Lewis, audiences are welcomed into the extravagant, decadent and rebellious world of Afrobeat legend Fela Anikulapo Kuti. Using his pioneering music (a blend of jazz, funk and African rhythm and harmonies), Fela! exploresKuti's controversial life as artist, political activist and revolutionary musician. Featuring many of Fela Kuti's most captivating songs and Bill T. Jones’s imaginative staging, this new show is a provocative hybrid of concert, dance and musical theater.