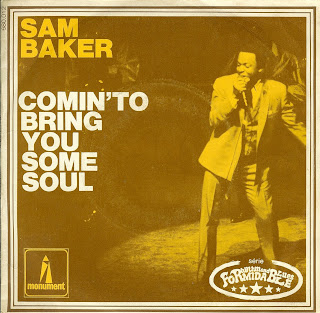 Sam Baker I Can't Break Away


Sam Baker Comin' To Bring You Some Soul

Again I am catching up on news from last month.!

It has been rumoured for years that Sam Baker had passed away. I am pleased to say that a discussion of his music on Southern Soul revealed that he was still with us!!!!!

I just spoke today to veteran Jackson, MS blues and soul drummer Willie Silas, and he said he spoke to Sam the day before yesterday and that he was fine. I know Sam, and it is definitely the recording artist to whom Willie is referring. The reports gave this documentarian a scare, and I´ll be heading down to Jackson with a tape recorder ASAP! Scott

Later Scott got to talk to Sam directly I confirmed he was the same guy who recorded for SS7 etc.

So I've dug out a French pic sleeve to celebrate!!!
Posted by Keeping Soul Alive at 4:55 PM