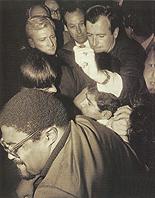 There has been such a proliferation of soul music blogs on the Net that it is difficult to keep up but one I have constantly gone back to is Rob Whatman's Brown Eyed Handsome Man. Rob's blog is about music primarily; soul, r&b, blues, gospel, jazz but he also writes about the music's context and black history.

He has written 2 posts on Rosey Grier over the last couple of months - the first post "A Man And A Half" about the artist in general. The most recent post "I Would Not Let More Violence Happen" was prompted by an interview given by Rosey to the UK Observer newspaper about his involvement with Robert Kennedy and the events surrounding Kennedy's assassination in 1968. I must admit that I had forgotten about Rosey being one of Robert Kennedy's bodyguards and his involvement in Kennedy's bid for the presidency.

After I read Rob's post, I went back to my 45s by Rosey Grier and dug out "People Make The World Go Around". This 45 is an atmospheric cut of the Bobby Womack song, which was recorded in 1968 at the American Studios in Memphis. I had always thought that the spoken dedication at the beginning of the song was for Martin Luther King but now I feel it must be for Bobby Kennedy.

Whatever your politics, this moving song still has resonance nearly 40 years later in a world torn by strife. 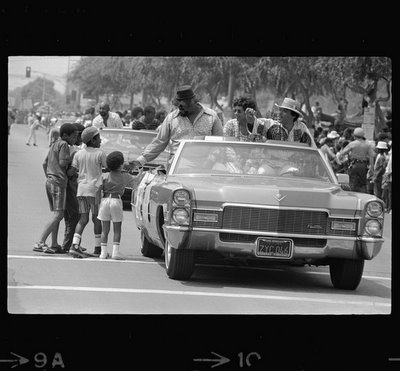