A Soulful Tale Of Two Cities 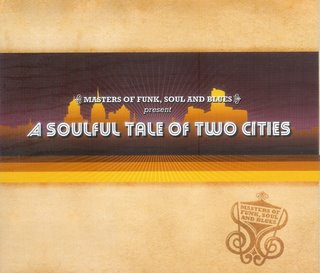 Over the past week, this CD and Shirley Slaugther's CD have been getting the most plays at In Dangerous Rhythm because of the quality of music on display on both CDs.

The idea of getting a bunch of Philly and Detroit recording artists to do each other's hit songs is an imaginative idea which works very well. However, what else would we expect with the line-up of talent on show and the production drive of Bobby Eli, Phil Hurtt and Bunny Sigler in Philly and Lamont Dozier and Clay McMurray over in Detroit.

What we have is a double CD of 15 Motown hit songs covered by Philly artists and 15 tracks by Detroit artists of Philly classics. There are so many good moments on display that it is difficult to choose favourites but I would go for Bunny Sigler's re-working of "Ain't Nothing Like The Real Thing" and Ali Woodson's "Ain't No Stopping Us Now" only because they are amongst my favourite singers!

All I can say is get a copy and you won't be disappointed!!!

Drop by A Soulful tale Of Two Cities to read the story behind the CD and see photos of the people involved.
Posted by Keeping Soul Alive at 2:44 PM