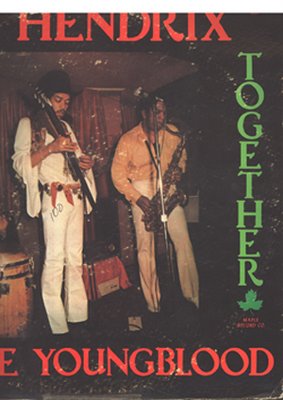 Regular readers of the blog will know that I have periodically posted my research on Johnny Brantley productions. This week, I received more information and music to fit some further pieces together around Johnny's productions and also pose further questions!

Niko Bauer of Early Hendrix fame has sent me a copy of the infamous album "Two Great Experiences Together" Maple 6004. Niko has been a great help in throwing light on a whole area of Johnny Brantley's work of which I was unaware.

I will be looking at the Maple album in more detail in the near future though you can read a fascinating interview with Lonnie Youngblood on the issue of these tracks issued on Maple by Frank Moriarty.

Niko also sent me a CD-R of tracks which are fakes produced by Johnny to cash in on his involvement with Jimi Hendrix and which used tracks originally recorded by Hermon Hitson, Lee Moses and the Ohio Players amongst others. You can read more detail about these fakes on Early Hendrix but I will also be putting my own thoughts together in a future post. Don't forget also that Hermon Hitson talks about these on his website.

According to Niko's Early Hendrix site, Nate Adams recorded the following masters for Atlantic in New Jersey on October 20th 1967:

I'm Gonna Be Good/Why Is It Taking So Long were issued on Atlantic 2466.

Hermon Hitson released "Yes You Did" on Minit and the only version of the song attributed to Nate I can find is an instrumental on an acetate which I turned up in my archives.

Nate Adams Yes You Did


George Scott released a version of "What Is It Taking So Long" on his Maple album and Hermon Hitson also recorded the song which is contained on the Soul Tay Us CD "Too Much For The Human Heart".

I assume "A Fool For You" is another version of the George Scott side on his Maple album.

Marion Farmer recorded his own version of “Sophisticated Alabama Soup Bone” on Tower 417. There is also a version of this song on the Ohio Players's First Impressions album which consists of tracks recorded by Brantley during the group's time at Compass.

Another track attributed to Nate, and not included in the above Atlantic masters, is his version of the "Love Slipped Thru My Fingers". This song was produced by Johnny Brantley and released by Sam Williams on Tower. Hermon Hitson also covered the song and it remained unisued until the Soul Tay Us CD. A further version has in the past been attibuted to the Ohio Players and released in various formats but actually it is Gloria Barnes with the Players. Nate's version is highly acclaimed on the Northern Soul scene having been played by DJ Richard Searling at the Wigan Casino back in the late 70's. I have managed to get an MP3 via Soul Source to share.


I have read that John Anderson, the famous UK record dealer and Grapevine label owner was ofered at least 10 different versions of the song when he was dealing with Brantley back in the 70's. Anderson did issue Sam Williams's version on Grapevine to satisfy demand from Northern Soul fans.

In the near future, I will deal fully with the Ohio Players, Sam Williams and George Scott.

The Lee Moses CD of his Maple and Musicor tracks is still hopefully going to come out!!!

I'd love to know whether Tuff City have other Johnny Brantley masters in their possession given that they had access to unissued material for the Hermon Hitson CD.

I am still hoping that the son of one of Johnny's business partners will get back to me and through some light on his dealings.
Posted by Keeping Soul Alive at 10:35 AM