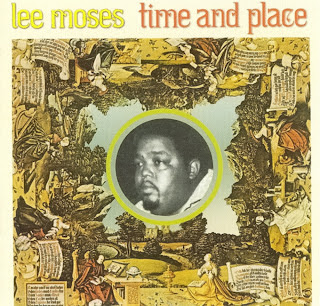 However, it is sad to think that Lee died before receiving the world-wide recognition which the CD is now providing for his talents as a singer, guitarist and songwriter.

The collection has his hard to find early 70's album 'Time And Place' with amazing versions of 'Hey Joe' and 'California Dreaming' plus all his known solo 45's including 'I'm Sad About It' and 'I Can't Take No Chances'.

Mojo Magazine have called it 'Soul music's Holy Grail' and Record Mirror made it their reissue of the month.

I worked on this CD project with Simon White who compiled the CD and wrote the CD notes. Unfortunately, Sanctuary Records did not have access to the masters which would appear to be long lost so the album was put together using my vinyl but nonetheless the mastering and sound quality are excellent.

I provide Simon with information for the notes which I had gleaned from various sources including an interview with Lee's sister Donia.

I will in the coming weeks put together a feature on Lee based on the information I have gathered. This will be a continuation of my research into Johnny Brantley productions and who was behind nearly all of Lee's sides.

I must say that I have been involved in many CD releases over the years but this one has given me the greatest satisfaction because I never thought we could get all together!
Posted by Keeping Soul Alive at 2:11 PM