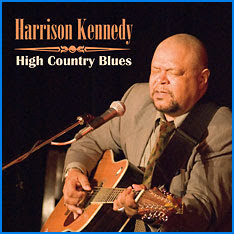 Harrison Kennedy is best remebered as one of the original members of The Chairman Of The Board. However, in recent years Harrison Kennedy has established himself as an acomplished and creative blues singer.

From many countries they came, to this land folks called “the high country”. Wherever, however they got here, the common thread is “Africa”. Along the way we have absorbed and been absorbed into many lands and musical traditions. What you hear in this small offering, is that ancient soul, living now, in a dynamic relationship with the present.

“In a way, I guess you might say I am a bit like Pete Williams, a Louisiana bluesman, who had few links to any recognized tradition. Like him, I grew up almost altogether apart from the influences of my contemporaries. My music is more lived than studied.”

Here is his bio;

Harrison Kennedy is a vocal chameleon, at ease performing funk, soul, R&B, rock, folk, jazz and blues. Presently concentrating his efforts on songwriting and combining his vocal, harmonica and guitar talents into a unique acoustic, folk-blues approach that reveals the introspective and creative quality of his music.His 2003 Juno®-nominated CD "Sweet Taste" is a testament to one of Canada's top vocal masters. Harrison Kennedy was a member and sometime lead singer of the 70's-era R&B aggregation Chairmen of the Board, one of the smoothest and most popular soul acts to emerge from Detroit in the early '70s.

After a string of million selling singles in the early 70's, Harrison, Nominee for the 2006 Juno Awards, has reinvented himself as a blues troubadour. His second CD, "Voice + Story", is not an easy record to categorize as Kennedy deftly mixes blues, R&B, soul and roots on this mostly acoustic outing. Harrison Kennedy provides his blues with a solid base; everything feels like it's in the perfect place. "Voice and Story" is not only the sum of 50 years experience but the culmination of generations of sometimes bitter history.

He has released a third CD entitled High Country Blues which I think is best yet. The CD features Harrison Kennedy on all vocals, acoustic 12 string & 6 string slide guitar; Keith "Happy" Lindsay - Accordian, Kalimba, Piano and Organ; Justin Dunlop - Contra Bass and Brian Griffith- Guitar. The executive producer is Andrew Galloway and the CD was produced by Harrison Kennedy with Andrew Galloway and Alec Fraser. The CD was recorded by Alec Fraser and Norm Barker at Studio 92, Toronto on May 30 and June 5, 2007.