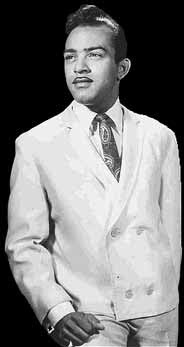 Frankie Karl's You Should O' Held On is one of those songs which has left an indeliable memory on my brain of dancing at Northern Soul nights. Therefore, I was sad to read on Soulful Detroit that he had died last week. 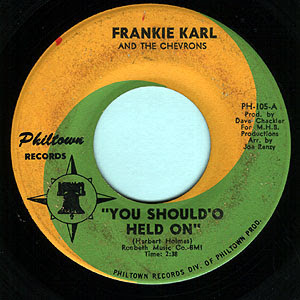 Frankie was in the Gospel group The Cogic Singers, and lead of the Soul group The Chevrons on Philtown (aka The Seventh Avenue Aviators on Congress) and The Dreams on D.C. 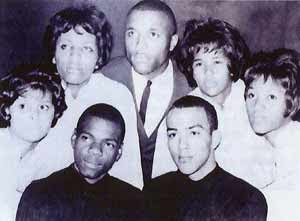 While his tremendous musical background has it’s roots steeped in the gospel arena, he was also lauded in the secular and stage as well. He has performed and recorded with luminaries to the likes of the late organist and composer Billy Preston, Pastors Andrae & Sandra Crouch, Sondra “Blinky” Williams, Edna Wright and Gloria Jones. Together, the aforementioned formed the gospel group, “The COGICS” and were the first to record ‘THE BLOOD” written by Andrae.

Influenced by artist from the hallowed halls of Rock and Roll, while serving his country in the USAF. Frankie and Herbert Holmes formed “The Chevrons” which included (Kenneth Calvert/St. Louis, Mo. Herbert wrote “You Should Of Held On” & “The Boy Next Door”. Upon his discharge from the military, Frankie returned to L.A. and formed “The Tripps” aka “Frankie Karl & The Dreams” and recorded, “Don’t Be Afraid, (Do As I Say, Baby)”. This recording ultimately became a hit on the R&B charts.

The success of this project garnered Frankie the opportunity to work with the legendary Gladys Knight & The Pips, Aretha Franklin, Lola Falana, The Jackson 5, The Commodores, Brenda Holloway, Minnie Ripperton, The Shirelles, The Coasters, Tavares, The Famous Clara Ward Singers, Eddie Kendricks of The Temptations and the late Mahalia Jackson.

(below as The Chevrons)

(below as The 7th Avenue Aviators)

(below as The Dreams) 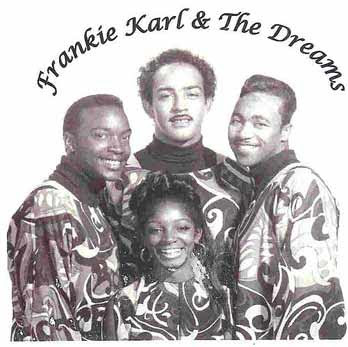 
(below as Frankie Karl & The Dreams)

(below as Frankie Karl)

His going home service will be held at:

Posted by Keeping Soul Alive at 10:02 AM