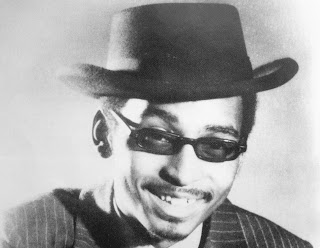 I am still miles behind after that the time out from blogging last month!

Catching up with another cracking interview from Bob over at Sitting In The Park:

Hi. Today on my radio show I did an interesting interview with Chicago recording artist Renaldo Domino (aka Renaldo Jones). Renaldo started recording while he was still attending Calumet High School on the south side of Chicago. His first recording -- "I'm hip to your game" / "I love my girl" was recorded in a tiny, low-budget studio and pressed in small quantity on the Arnell record label. Renaldo and his manager William Sandy Johnson were able to use the record to get a recording contract with Mercury records.

Domino released two records on Mercury's Smash subsidiary -- "I'm getting nearer to your love" and a redone version of "I'm hip to your game". Both records got radio play in Chicago and Domino began to tour around the midwest with his band the Dots. Domino's final Mercury single, "Just say the word", was his biggest hit on the label. Due to lack of promotion, Domino left Mercury and signed to Chicago's Twinight label. He released three singles on the label, all produced by Richard Pegue. "Not too cool to cry" and "Let me come within" received local radio play but the final single, "You need to be loved on" had little promotion and Domino got a release from the label. After a few unsuccessful attempts to secure a record deal on other Chicago labels, Domino left music to pursue his career.

You can check out the interview at: