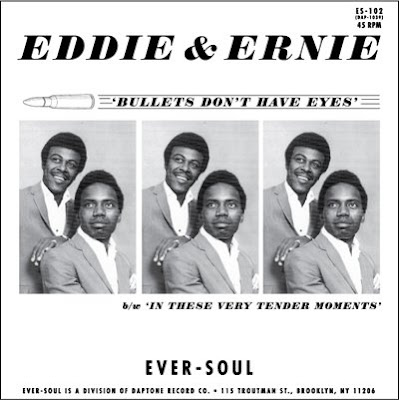 Daptone have sent me news of a 45 release on their Ever-Soul label by Eddie & Ernie:

Sometime in the early 1960s Hank Mullen's friend and fellow Buffalonian Carl LaRue, an organ player, traveled with his group (Carl LaRue and His Crew) all the way to Phoenix, Arizona, where he'd secured a steady gig as the house band at the local Zanzibar club. Soon after starting the job, he would invite a young (16yr & 19yr old) vocal duo to perform some of their original songs in front of his band during shows. Ernest Johnson Jr. and Eddie (Edgar) William Campbell were eager to make it in music and for the next 10 odd years would attempt to do so. They managed to record and release a handful of singles across varied imprints spread throughout the United States, from South Carolina to Chicago, from New York to Phoenix. One of the pairs singles, "Time Waits for No One", hit #1 on New York's WWRL, which subsequently landed them on the bill at the Apollo, appearing alongside soul heavyweight's gene Chandler, Wilson Pickett and the Temptations. Through ups and downs, none of their pair's recordings ever served to catapult them to greater fame and sadly in the early '70s, Eddie's premature death would close the door on their partnership.

When collectors Chad Weekley and Tony Janda brought Eddie and Ernie's "Bullets Don't Have Eyes" to my attention last fall I immediately knew it deserved priority as the next Ever-Soul single. One of the duo's last recordings, this tremendous cut was never released at the time of its creation in 1972 and was only first issued six years ago within Kent's excellent survey of their recordings: Lost Friends (Kent CD 214). The late Dave Godin, legendary soul polymath and the fundamental agent in the Kent project, referring to "Bullets Don't Have Eyes" in the compilation's notes, said “if this one got the plays it could really go places." The truly sublime b-side chosen for this Ever-Soul 45, "In These Very Tender Moments,” was issued on the Phoenix imprint Artco in 1967, but remains largely unknown today. Although obscure, undoubtedly their music has moved the souls of countless listeners over generations. It is our hope that this present release will help keep this music moving to new places, new ears and new hearts.

Special thanks to Phoenix Arizona's John Dixon, Carl Larue and the late Dave Godin, their direction, notes and memories were invaluable in the creation of this release.

Eddie & Ernie Bullets Don't Have Eyes b/w In These Very Tender Moments
Posted by Keeping Soul Alive at 11:04 AM