Marlynns On Sitting In The Park 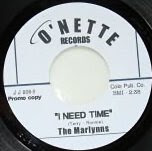 Bob from Sitting In The Park has been in touch about his latest show:

Hi. Today on my radio show I interviewed members of the Chicago group the Marlynns. The Marlynns were from the South Side of Chicago and formed at Hirsch high school. The group was originally called the Norvells (named after the wife of the bass singer of the Soul Stirrers) and were an unusual Chicago group as they featured a woman on lead with male backing singers. After Richard Pegue's group the Belvederes took the name the Norvells, the group changed their name to the Marlynns. After a couple of years of playing in talent shows, the group got a record contract, via legendary Chicago engineer Ed Cody, with Tower records. The group released their first single on the Tower label in 1963. The A-side of the record, "The Break", was a novelty dance track that received radio play in Chicago. The flip, "My heart is yours", was a nice Miracles inspired ballad. The group appeared on the Jim Lounsbury TV show and, via Lounsbury, did record hops for White teenagers in the northwest suburbs.

The group recorded their second single, "Come back" b/w "The very next time", a year later for James Shelton's Daran record label. Shelton was group member Terry Thompson's uncle and Marshall Thompson of the Chilites was Terry's cousin; the tracks were recorded at the same session as the Chi-Lites' "I'm so jealous". Despite both sides of the Marlynns record being excellent ballads, the track received little promotion in the wake of the Chi-lites' success. Although the Daran record was the last Marlynns single, the group did do some session work, backing Sheryl Swope on her first single, backing other Daran artists, and even doing backing
vocals for Ral Donner.

The Marlynns disbanded in the mid-to-late 60s after Thompson joined the military. A couple of the members formed a band called the Chi-TNTs that played around Chicago until 1973. Member Sheryl Henry joined the South Shore Commission, singing lead on tracks such as "We're on the right track". Terry Thompson started working as a session drummer in Chicago even in high school while with the Marlynns (he even was on staff at Vee Jay records). Thompson also worked at Chess, playing drums on a large number of Chicago soul records in the 60s and 70s. He also began producing and arranging music in the 60s, working with James Shelton, Richard Pegue, and Clarence Johnson. He continues to be involved with performing and producing music in Chicago.

You can listen to the interview on my webpage:

you can listen to previous music shows at:

Posted by Keeping Soul Alive at 10:59 AM