Sir Ted Ford I Wanna Be Near You Shotgun 45 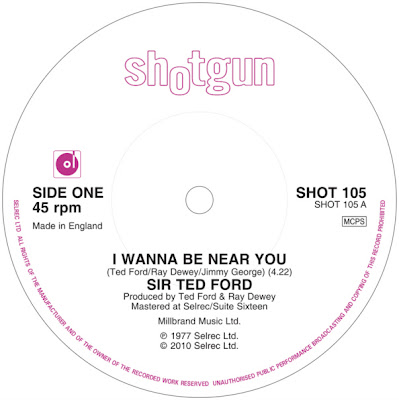 Here's the latest release from Paul Mooney's Shotgun label. Only seems like yesterday when I bough this on Ardent back in the 70's when Paul first released it. In fact, it sounds better than ever - great to see it available again!

'I Wanna Be Near You' and 'Disco Music' by SIR TED FORD are released back-to-back on Shotgun SHOT 105 on Monday, December 6th.

Both tracks are in heavy demand after being overlooked by most people when originally released as individual singles in 1977 and 1979.

The tracks have been remastered at Suite Sixteen and sound better than ever.

All Shotgun singles are available from all good dealers and copies can also be ordered direct from Selrec.

Thanks for the huge support for our recent singles by Eddie Floyd (SHOT 104) and Sam Dees (SHOT 103). Watch out for news of SHOT 106 which is scheduled for January 2011.