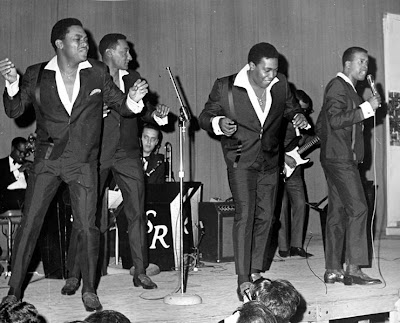 Levi Stubbs, the renowned lead singer of the Four Tops has died aged 70. I recieved the sad message via the following source:

Levi Stubbs the most profound lead vocalist in American history died this morning at his Detroit home sources have confirmed. Stubbs who suffered a series of strokes and other illnesses had been sick for a number of years prior to today's news. It was most visible during the televised "50 year anniversary Celebration of the Four Tops" broadcast a few years ago.

During the 80s and 90s the Tops were one of 3 Motown groups that still had all of their original members performing. The only other groups were the Velvelettes and Martha and the Vandellas.

The Four Tops started their career in the mid 50s, and were already professional recording artists and performers by the time they got to Motown.

They recorded for several labels before signing to Motown in 1963. "Baby, I Need Your Loving" (July 1964), written and produced by the team of Brian Holland, Lamont Dozier, and Eddie Holland, was their first substantial hit,

setting the pattern for a series of songs showcasing Stubbs's emotive wail set against the Benson-Payton-Fakir harmony line. Need and longing would be the hallmarks of Stubbs's singing on such songs as "Ask the Lonely" (January 1965), which launched a string of R&B Top Ten/pop Top 40 hits over the next two years.

Holland-Dozier-Holland who wrote a ton of the Four Tops hits left Motown (1967). With fortitude and conviction Stubbs and the gang still cranked out hits such as "If I were You Carpenter",

"It's All in the Game," "Still Water (Love)," a duet with the Supremes on "River Deep Mountain High," and "Just Seven Numbers (Can Straighten Out My Life)," all of which made the R&B Top Ten and the pop Top 40.

Funeral arrangements will be provided at a later date.
Posted by Keeping Soul Alive at 5:26 PM