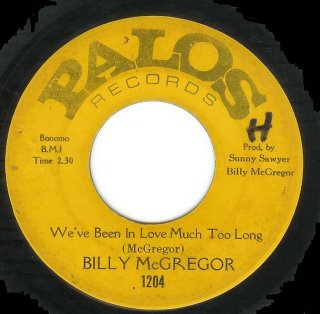 A copy of the above dropped through the door today in the never ending and arduous world of record collecting!! Collecting 45's is often about connections or recommendations or you simply hear something or take a chance because of a name on the vinyl. In this case, I first read about Billy's 3 records in Issue 16 of the UK magazine Voices From The Shadows. In that early 90's edition, Rod Dearlove, the editor, wrote a ground breaking article on what had become known as "crossover soul" which referred to the type of late 60's and early 70's records with a certain beat/feel which were then breaking on the dancefloors of clubs across the UK.

I would think that the Palos side is Billy's second 45 on an obscure Chicago label which has a few other interesting releases by Lee Shot Williams and LV Johnson. "We've Been In Love Much Too Long" is a jerky mid-tempo side with prominent strings and a catchy chorus. Billy is a fine singer who can let it rip when he needs. I love his lyrics telling the tale of what can happen when a lover takes you for granted or messes you about or gets moody!!! The B-side "I've Got It" is more in the vein of other Palos releases in that is a heavy rough repetitive piece of Chicago R&B with plenty of nagging guitar riffs though it is a lot more funky than say LV Johnson or Lee Shot. So I manage to get a copy of the Palos 45 nearly 15 years after reading about it in Voices - not bad!!

Look out for Billy's other excellent 45s - "Mr Shy"/"Fall On My Knees" on Flash which is a common side mainly I suppose because it was a local hit in 1965. "My Shy" is a good beat ballad and "Fall On My Knees" is a very typical '65 Chicago beater in the vein of Otis Clay, Tyrone Davis etc. The killer cut from Billy is wonderful midtempo groover "It's My Turn Now" on Mellotone which Rod highly recommened in the article and which I always enjoy playing. It s a side I have played it a few times on the radio to good response and most people want a copy when they hear it!!!

They are the only 3 releases I know by Billy are there any more???