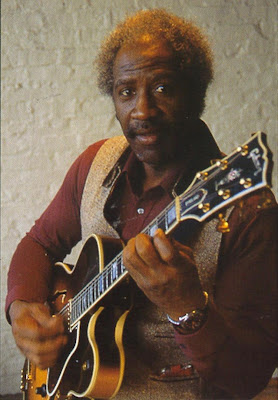 Born in Greenwood, Mississippi, Robinson left his home at the age of 18 to move to Memphis, Tennessee, where he recorded his first single "Tennessee Woman" in 1957. He settled in Chicago in 1962. His signature song, "Somebody Loan Me a Dime" (1967) was covered by Boz Scaggs in 1969, but attributed to Scaggs himself, resulting in legal battles. The nationwide distribution of Robinson's own version of the song was aborted by a freak snow storm hitting Chicago. The song has since become a blues standard, according to 1997's Encyclopedia of Blues being "part of the repertoire of one out of every two blues artists.

Robinson re-recorded the song, which was originally recorded in 1967 for the Palos label, for the critically acclaimed album Somebody Loan Me a Dime in 1974, the first of three he would produce under the Alligator Records label. For the second, 1977's I Hear Some Blues Downstairs, Robinson was nominated for a Grammy Award Read more on Wikipedia

Here's a video of him performing in Holland in 1984:

Listen to more of Fenton Robinson's music over on Just The Blues blog
Posted by Keeping Soul Alive at 8:18 PM