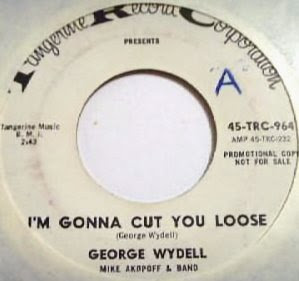 Last week, I discovered the sad news that George Wydell had died after reading an article by Guy D’Astolfo in Vindy.com

YOUNGSTOWN — George “Wydell” Jones, who wrote the doo-wop hit “Rama Lama Ding Dong” and performed it as a member of the Youngstown-based vocal group The Edsels, died Saturday at his Jackson Street home on the city’s East Side. He was 71.

“Rama Lama” peaked at No. 21 on the Billboard Hot 100 chart in 1961. The Edsels also included Jimmy Reynolds of Youngstown, Harry Green, Marshall Sewell and the late Larry Green.

Jones, who suffered from cancer, had been retired from the music industry.

Steffon Jones, son of George, is serving as family spokesman. He called his father “a loving, kind-hearted man who loved his family. Music was his passion — music, and his love for Jesus.”

During The Edsels’ heyday, the group performed at the famed Apollo Theater in New York twice, and also appeared on several national pop-music television shows, including “American Bandstand” and “Shindig.”

Jones was not only the lead singer of The Edsels, but he also wrote and arranged the group’s songs.

Bob Crosby, president of the Vocal Group Hall of Fame, mourned Jones’ passing. “The Edsels were an important musical group, and ‘Rama Lama Ding Dong’ was a classic,” he said. The Edsels have not been inducted into the Vocal Hall, but meet all criteria. “Some day they probably will be inducted,” said Crosby.

Jones was born Oct. 5, 1936, in Richmond, Va., the son of the late George Jones Sr. and the late Frances D.C. Jones. As a child, he moved to the Youngstown area, where his father got work in a steel mill, and spent most of his life in the area. He attended Campbell Memorial High School.

He sang with his friends on street corners in Campbell as a youth, said Steffon.

After high school, Jones joined the U.S. Air Force, where he sang in a vocal group with other servicemen. He was in the Air Force when he wrote “Rama Lama.”

Jones’ interest in music began at a young age, said Steffon. “His great-uncles were musically inclined, playing the guitar and piano, and he worked with them.”

Jones liked to share stories with his children about his days as an entertainer. “He said that he would write a song in the car as they were going to a show, they would work it out and rehearse it, and by the time they got to the place where they were going to perform, they had it down pat,” said Steffon. “That’s how good they were.”

The success of “Rama Lama” surprised Jones, according to Steffon. “He loved the song, but he didn’t think it would be a hit,” he said.

Jones also managed several gospel music groups in later years, including The Jones Gospel Singers, which was comprised of his family members.

Here is George singing with the Edsels: