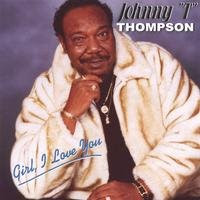 I dropped by Sir Shambling's Deep Soul Heaven and was tipped to the above CD.

You can pick it up from CD Baby:

JOHNNY THOMPSON is a native of Chicago, but currently resides in Orlando, Florida. His vast musical history is far too much to detail completely. However, a very short list of performers with whom Johnny has shared a stage are: B. B. King, Freddy King, Bobby 'Blue' Bland, Little Milton, Johnnie Taylor, Tyrone Davis, James Brown, Muddy Waters, Jackie Wilson and Junior Wells. Johnny's first record, SO MUCH GOING FOR YOU BABY, was on the Chess label. He later released MAIN SQUEEZE for NewMiss records, hitting the top twenty charts nationwide. This record was how the term 'main squeeze' came into being. Johnny ventured out to on his own label and production company, releasing GIVING UP ON LOVE on his Jay-Tee label. For several years, he was on the road with BILL PINKNEY'S ORIGINAL DRIFTERS, touring all over the world. Johnny is now back as a solo artist with his new CD titled GIRL I LOVE YOU, a perfect selection of music for you and your main squeeze. This CD showcases Johnny's diverse talent, exercising his expertise and smooth styling in a collection of ballads and blues.

The CD is actually from 2003 and if you want to find out more about Johnny Thompson's earlier recordings then drop over to Sir Shambling.
Posted by Keeping Soul Alive at 8:27 PM