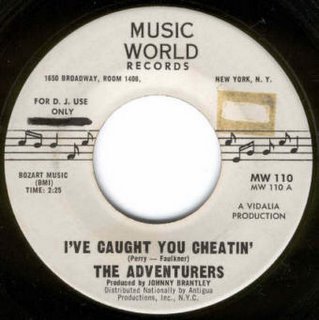 A search of the Soulful Detroit Forum dug up some discussions about the group's recordings. The consenus seemed to be that this group recorded the Columbia, Music World, Compass and Blue Rock sides and that the Ran Dee side was recorded by another. This is based on writer credits and listening to the singers. There also seems to be a third group with that name on Reading which were a garage band from Pennslyvannia.

The Adventurers recorded an album for Columbia with group members Gerald Perry and Mac Williams who feature on the Music World 45. According to the book Soul harmony Singles, Perry and Williams later formed a group called the Chosen Few with Roy Handy which had an album produced by Johnny Brantley and released on Maple in 1971.

The Adventurers group who recorded with Johnny Brantley recorded the following:-

This is discussed in Adventurers Postcript

Music World 110 I Caught You Cheating/Darlin'

This is must be one of the earliest Johnny Brantley productions because it sounds circa 1964/5 and is unlike any of his known recordings. I Caught You Cheating is a singalong uptempo track which has been popular on the UK rare soul scene as a dance record. The song was written by group members Perry and Faulkner.

A Good Girl starts with a distinctive organ intro with a poppy feel and a strong back beat and is quite catchy. However, the B-side Easy Baby written by Perry, Johnson and Wicker is a powerful piece of soul dance music which has been popular on the UK Northern Soul scene since the mid-70's. Perry and Johnson' production is influenced by the mid 60's market leaders Motown as it kicks off with a distinctive blaring horn opening before breaking into a Motownesque call and answer group vocal propelled by bongo drums. It has an atmospheric tom tom drum break with the guys breaking into party type vocal refrains before driving onto the end dominated by the singing of Easy Baby which makes it a memorable piece of dance soul and rightly popular.

Blue Rock 4071 Something Bad/Nobody Can Save Me

These recordings were produced by Perry and Tohnson for Johnny Brantley's Vidalia Productions and arranged by Stick Evans. Something Bad has the same lead as A Good Girl and is piece of harmony soul similar to the Chicago type group sound of the mid-60's. It is written by group members Eddie Johnson and J Wicker. The B-side Nobody is Gerald Perry co-written song with James Wicker and is similar in style to Easy Baby with it's tambourine opening is very Detroit sounding side and is influenced by the Temptations etc with a great guitar break probably played by James Wicker.