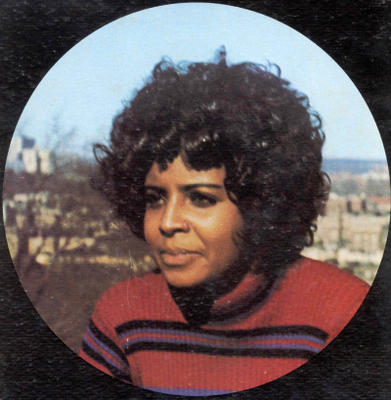 Gloria Barnes is a wonderful soulstress who I know little about except what can be gleaned from the notes on the back of her Maple album Uptown that she came from Harlem. Her first release was Groovy 3003 If I Am Guilty/Oh Darling as Towanda Barnes.

Her first Johnny Brantley related release was the early version of the Ohio Players's You Don't Mean It backed by Lewis/Brantley song Find Someone To Love Me on A&M. However, it is on the Uptown album that her talent shines through with 8 great songs produced by Johnny Brantley with input from Lweis/Lewis/Farmer. Below is a breakdown of each song on the album:-

Old Before My Time

A 7 minute opus to kick the album off as Gloria delivers an aching vocal of pure intensity backed by a Dayton, Ohio group The Hustlers. The song is backed by an atmospeheric organ and mournful guitar which allows Gloria plenty of space to espouse the reasons why she aches so much. She is simply getting old before her time because of her aching heart. This is one of Lewis/Lewis/Farmer's best songs. The backing builds over the 7 minutes plus as she unleashes her passion with wistful sax breaking in after 6 minutes adding to the atmosphere. The picture for me is a small combo in an after hours club with the bartenders clearing up and Gloria just jamming with the band as she tells her story of woe to no one in particular. Her voice seems to echo around the recording - a voice which has practically unique though she does have some similarities to Linda Jones but just odd bits.

I'll Call You Back Later

Hustlers lay a nagging backdrop of guitar riffs, horn lines, punchy bass and high hat similar to the Ohio Players. The song chugs along like a train with the guitar calling out like a whistle as Gloria wails over the Lewis/Lewis/Farmer song saying if he calls back later that she won't be answering! Love the bit where the music drops back and she stutters out her lyrics and she tells her man that she knows the score.

A third Lewis/Lewis/Farmer song finishes side 1 which starts slowly with almost Western horns and crashing cymbals before the backing drops down to let Gloria enter and take centre stage. This is another strong set of lyrics for Gloria to tear up and the song reminds me of the intensity of Jackie Montrell's Doomed By Jealousy or a Linda Jones song. The Hustlers again do an excellent job allowing her plenty of space for work her stuff.

This uptempo song features the Ohio Players and is written by them and was also recorded by them. It is a typical early Ohio Players song driven by bongos and blasting horns with plenty of breaks and held together by an incessant guitar run.

You Don't Mean It

This is the killer and superior version of the Ohio Players song which is pure primitive excitement with Gloria's haunting echoing vocal making the record deep soul over an uptempo beat. From the start this recording, with its live feel, just ouses pure emotion from the bongo drum opening until Gloria calls out "You Don't Mean These Things You Said". The Ohio Players also supply sparse backing vocals which add to the mood. The song is propelled along by the nagging horns and guitar with one of the most intense vocals you ever likely to hear - you really believe this girl as tells the story and you spin around the ballroom dancing to one of the best ever dancers to grace the UK rare soul scene.

This song features Lee Moses and his group the Deciples and is Bobby Dixon song and sounds similar to some of Lee's recordings with its emotional intensity. Gloria is telling her lover that she is Home and what it means and perhaps she is back after leaving him for another and recognising the error of her ways - she is going to rest her mind, her heart and her soul - but it was his fault she left and wandered in the first place.

She Wants A Stand In

This back to the Hustlers and a Lewis/Brantley song reminding me of a Hermon Hitson. Again full of emotion over a strong mid tempo jerky beat with powerful drumming. The band go over the place but it is all held together with the insistent bass.

I'll Go All The Way

Back to Lee Moses and the Deciples and a second Bobby Dixon song with a very Southernish feel. It almost sounds like Gloria started singing in another room and gradually walks to the microphone. This slow builder again features some nifty guitar work from Lee Moses.
Posted by Keeping Soul Alive at 8:00 PM