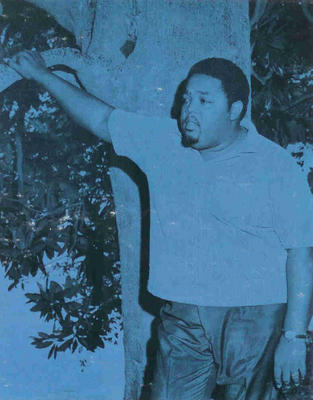 Lee Moses is one of the mystery men of soul music who would appear to have disappeared or passed away because he has not been heard of for years. The nearest I ever got to him was talking to the Mighty Hannibal one night in Harlem back in the early Millennium. Hannibal thought he was still with us and we briefly chatted about Lee working with him on Hannibal’s Aware album “Truth” playing guitar with Hermon Hitson. Hannibal didn’t throw up any biographical details except that Lee and Hermon emerged out of the Atlanta soul scene back in the mid 60’s, which was also Hannibal’s home city.

Lee must have also been close to another cult soul figure Johnny Brantley who we can presume was originally another Atlanta resident who moved to New York in the late 60’s taking Lee with him. Lee was one of several artists including the Ohio Players, Hermon Hitson, Sam Williams, Gloria Barnes, Chosen Few, Bobby Brown, Jimmy Norman, Nate Adams, Freddie Terrell etc who worked with Johnny Brantley during the late 60’s and early 70’s. Lee had a group called Deciples who backed Gloria Barnes on some of the tracks she recorded for her Maple album “Uptown” and it is possible Lee played on other Johnny Brantley productions.

Johnny Brantley is documented as being a mover and shaker on the New York soul scene working with people such as Bobby Robinson etc. This is why Lee’s music appears on several New York based labels such as Dynamo, Front Page and the also the New Jersey label Maple because Johnny was cutting deals where he could to release his productions. Johnny’s Vidalia productions were also picked up by such labels as Atlantic, Capitol, Verve, Josie, Minit etc.

My Adorable One Lee John 618

A biographical tale as Lee’s self-penned song tells the story of him leaving Georgia and meeting a girl up in New York. These songs may have been recorded in Atlanta and released in on the New York label because they sound pretty raw and similar to other Atlanta productions by Grover Mitchell etc with Wendell Parker at Shurefine.

This is possibly from Lee’s first productions with Johnny Brantley from around early 1965. It has been documented that Lee recorded 2 sides for Dynamo I Need A Woman Of My Own / Your Man on Dynamo 113. This is incorrect and the 2 sides are in actual fact Tommy Hunt recordings with I Need A Woman Of My Own appearing on Dynamo 113 and Your Man remaining unissued until Kent's CD The Biggest Man in 1997.

If Loving You Is A Crime is a deep soul classic and owes a lot to the Otis Redding ballads, which it was cashing in on. However, Lee is his own man and no Redding sound alike as he tears the roof off the song wailing that he his “so guilty”. The song has lovely guitar riffs running from the distinctive beginning to the end, which must be played by Lee.

Never In My Life Dynamo 115

Lee penned this with Freddie Terrell and it is a piece of James Brown mid 60’s funk put through a Georgia grind mill with blaring horns which sound like the Ohio Players. Towards the end Lee bursts in with “I Got That Will” which predates the song of that name he wrote for Hermon Hitson.

Lee recorded several sides for Musicor including instrumental versions of the Beatle’s Day Tripper and the Four Tops’s Reach Out I’ll Be There.

The instrumentals are throwaway in comparison to the 4 vocal tracks released by Musicor. A raucous early version of the self-penned song covered by Hermon Hitson for Minit. The song is a totally crunching number, which epitomises Lee’s style, which is raw soul music!

Another self penned opus with Lee pouring out his grief about how he has been wronged and blinded by love. Lee breaks the song down to a repetitive riff, which must have been straight out his stage show where he comes on like James Brown as he tells us how sad he is about it!

Lee’s music is about power as he puts down layers of sound with strong bass lines and that crunching drumming and he then wails over the top repeating words in a style very reminiscent of his fellow Georgian Hermon Hitson.

The song starts with a jangling guitar riff as the Ohio Player type horns build up the song into a slow march. Lewis/Farmer/Lewis, a writing team who also wrote several songs for Hermon Hitson and other artists associated with Johnny Brantley, wrote this song. The song is a beautiful one with Lee explaining that he has to concentrate on his girl before someone steals her from him. The killer lines are Lee singing his heart felt feelings with the male backing saying he can’t take no more chances.

Lee recorded this 9-track cult album with Johnny Brantley possibly sometime in 1971 in New York or New Jersey for the All Platinum subsidiary Maple. The album has a recut of Adorable One, covers of Womack’s California Dreaming and Hendrix’s Hey Joe. The album also features Time And Place which was also released on Front Page 2301 and written by Lewis/Farmer/Lewis as were Free At last and Would You Give Up Everything were. The album could also include a possibly unaccredited Ohio Players who back Gloria Barnes on her Maple album and Lee’s group at the time – The Deciples. The album also has the only 2 known photos of Lee on the sleeve.

The album kicks off with Time And Place with Lee humming his way over a funky riff with plenty of bongos and bass before the song breaks down to some lovely slightly off key horns.

The album continues with Lee covering Got That Will the song he wrote with Hermon Hitson and which was covered by Hitson on Atlantic and Mighty Hannibal on Aware. Lee runs through a host of soul singers such as Sly Stone, Dionne Warwick and Jimi Hendrix, who he wants to emulate and become a star. The track is dominated by Lee’s guitar, which becomes more freaked out as the track develops which may be influenced by Hendrix.

What You Don’t Want Me To Be

A tortuous song with Lee telling us how difficult it is to be something he isn’t. The song meanders all over the place with the Lee’s guitar leading the whole thing to a climax with the women backing singers telling him to be himself.

This is like Hendrix meets Womack with Lee giving the song a much rougher interpretation than Womack. It is hard to fathom out what the link is between Hendix and Lee with Johnny Brantley cashing in on Hendrix’s death with an album Jimi Hendrix’s Moods featuring an un-credited Lee Moses on vocals.

Every Boy And Girl

Lee wrote this song, which is a very old fashioned ballad telling the story of him and his girl with lots of screams and almost choir like backing.

Lee pays tribute to Hendrix on the classic tune and we are left wondering whether the song has a biographical edge especially with Hendrix dying just before the recording of the album. Lee covers the song like only he could giving the song a more funky edge with his guitar dominating the whole song as it builds up to a climax over 6 minutes long.

This memorable song from Lewis/Farmer/Lewis tells of the love between 2 lovers who don’t have to slip around in the shadows anymore. The song chugs along but is uplifted by Lee’s vocals as he tells how they can be together without people talking.

Would You Give Up Everything

A funky and slightly jazzy groover, which would have sounded great in a smoky club in Harlem as Lee, opened up his floorshow.

Lee updates his previous cover of the song on Lee John taken at a slightly slower pace and again this would have probably been part of his show.

Lee may have returned to Atlanta in the early 70’s because his last known release is a recut of his Musicor side produced by Johnny Brantley.

Lee covers the Southern Soul classic in a style typical to him, which is full of his usual guitar and organ however his voice sounds tired and not as strong as previous recordings. He actually covers the song as done by Clarence Carter in his slipping around version.
Posted by Keeping Soul Alive at 2:20 PM