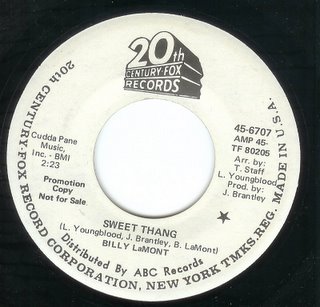 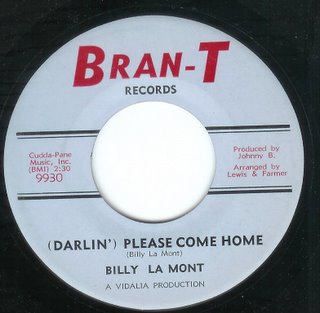 Sweet Thang is a record famous for the fact that it is genuinely Hendrix playing some blistering guitar that only he can play. Brantley tried later on to cash in on Jimi's fame by getting Lee Moses to copy the style but here is the real thing. This was probably recorded in New York's Abtone Studios circa June 1966.

The song is a rough work out for Billy La Mont's vocals as he screeches over the backdrop of Hendrix's guitar and Brantley's other tell tale use of blaring horns. The song is co-written with Lonnie Youngblood so one can expect that he is on the session because he also co-arranged the song with another Brantley regular T.Staff. The B-side Please Don't Leave is a quieter affair and is a typical ballad which rips off James Brown's Please, Please, Please.

This record has attracted interest from the Hendrix specialists and you can find further information on alternative versions of the record on Hendrix compilations here:-

The above site informs that Sweet Thang also appeared with vocals by Lonnie Youngblood and changed lyrics with the title of Wipe The Sweat and appears on a early Hendrix compilation.

Billy had another 45 out on Brantley's Brant T label (Darlin') Please Come Home which is very similar in style to Please Don't Leave. The song is actually arranged by Lewis and Farmer who usually provided songs for Vidalia Productions. The other side is a version of Jimmy Norman's So Called Friend which has a thick heavy backing of guitar homes for Billy to work his stuff over and broken up with rolling thunder drums as the horns drive it forward. There is some nifty guitar playing in a middle segment with Billy impeaching his lover about her so called friends. The horns build this song up and there is a terrific roll of the drums before it fades. Jimmy Norman arranged the track.

I have no further information on Billy and I don't know whether it is the same guy who had Country Boy on Okeh in 1959 and perhaps also cut the tunes Hear Me Now, Talking Trash and Lookey Dookey in the 50's. There was also an Official label CD out called Billy La Mont meets Chuck Edwards but again I have no further details.
Posted by Keeping Soul Alive at 6:16 PM