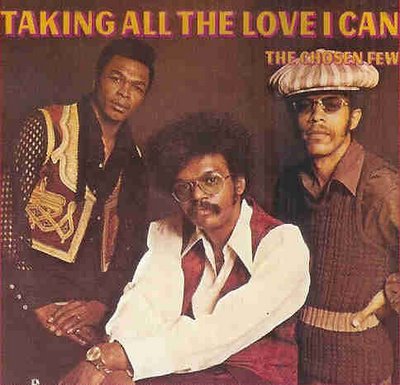 Chosen Few grew out of an earlier group The Adventurers which released at least 2 Johnny Brantley productions on Music World and Compass and a further 45 on Blue Rock. This group must not be confused with a group of the same name who recorded for Polydor and RCA in the 70's and there are at least a few other groups who used the name.

The Chosen Few had 3 tracks released on 3 different 45's and an album Taking All The Love I Can on Maple which were all issued around 1970.

According to the book Soul Harmony Singles, the group consisted of three singers Gerald Perry and Mac Williams originally from the Adventurers and Roy Handy. This is supported by the above photo from the album featuring 3 singers. However, if you listen to the music on the album it is obvious that they used early Adventurer's songs which don't sound re-recorded and which must feature the original members with some new material and perhaps some previously unissued tracks from the Compass/Blue Rock period

Maple album Taking All The Love I Can

Taking All The Love I Can

A Freddie Briggs song sounding like the Four Tops with a searing powerful lead vocal.

This is the same song as the Adventurers on Blue Rock. It has lovely harmonies over a sophisticated backing with a familiar guitar riff which I cannot place! This is very different in style to the other type of Johnny Brantley productions on Hermon Hitson etc. This is written by group members Eddie Johnson and James Wicker.

Birth Of A Playboy

A very old fashioned piano driven beater with a rolling drum intro which has close harmonies before breaking into a thick smokey sax break. This is written by Eddie Johnson and Gerald Perry and the inclusion of Johnson's name suggests an early recording or a song written at an early period for the Adventurers.

I Caught You Cheating

This sounds like a note for note copy or the original Music World recording!!

I Got To Hold On

A Dutch Robinson written song which originally appeared on the Ohio Players Compass recordings album First Impressions. This sounds like the original backing track with the Chosen Few/Adventurers's backing vocals added. The song is a light weight poppish song with rock influenced guitar though there is another guitar higher in the mix which could be Lee Moses or James Wicker. The song sounds similar to the Chamber Brothers.

This is another Ohio Players song from the First Impressions album. This time it sounds as though it was either remixed or recorded. A driving piece of music similar to the Temps psychedelic outings. Again, the Chosen Few vocals may have been added later.

I Can't Take No More Chances

A gorgeous version of the Lewis/Lewis/Farmer song also recorded by Lee Moses on his Maple album which sounds sweeter than his version with the group harmonies and added strings. This version also has bigger horns which may have been remixed.

Nobody Can Save Me

You Say You Love Me

This is a very early sounding Eddie Johnson song with almost Mereybeat harmonies. It sounds very early 60's with an old fashioned piano and rolling drums reminiscent of early Motown. It also has very close poppy harmonies from the guys.

Love For My Girl

A Gerald Perry and Eddie Johnson song and again is a real throwback sound with a clip clop beat and close harmonies. It would not sound out of place in Chicago and is very similar to Major Lance/Impressions record. It has a sax break and speeds up after the break as was the style circa 64. This must surely have been in the can since Music World?

The guys put vocals over the Ohio Players driving piece of late 60's soul which was one of their Compass recordings. The guys do an excellent job on the vocal because this is a powerful piece of music and the Players were breaking down barriers with this music.