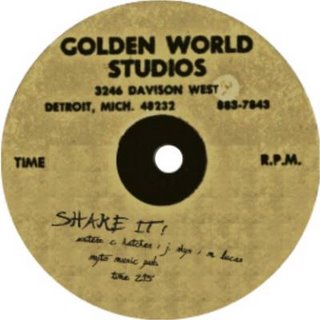 Over the last decade, we have been lucky to hear musical treasures that have been unearthed in the basements, attics and the back rooms of old studios. Now another gem has surfaced after nearly 40 years in the shape of Matt Lucas's "Shake It". The track uses the same backing track as Edwin Starr's classic Ric Tic side "Back Street" but the song has a different set of words written by Edwin Starr, John Rhys and Matt Lucas.

I was first told of this by my friend Nick Sands after he had been talking to Matt. A quick search around to find out more about "Shake It" led me to Mark Hanson who has joined forces with former Detroit maestro John Rhys and his Blue Power organisation and created an offshoot called Blue Power Soul.

Apparently, the track has laid around for a long time but was in poor shape. It was cleaned up by John Rhys using the mastertape that Matt had found in his house, which though damaged in parts was pieced back to gather with great skill by John Rhys shortly before Christmas 2005. Matt has done a few bits overdubbing and re-recorded the odd line. Mark Hanson has transferred it from stereo to mono the track and it now sounds clear as the day it was recorded!

The backing track is one of the best ever Detroit sides and with Matt singing over it you once more tranpsorted into a magical era of the Golden World Studios. Matt gets every ounce of excitement out of the dance orientated lyric and it deserves to be massive on the Northern Soul dancefloors around the world.

All that's need now is for a DJ to get behind the track.

In the meantime, Matt has got over a recent illness and will be setting off on a series of concerts around the USA.
Posted by Keeping Soul Alive at 2:14 PM