Allison & Calvin Turner It's Over Between Us Lulu/Atlantic


A gret tune from a band better known for the Act 1 album which was reissued by Luv N Haight:

One of the last great years for funk music. Real funk music. Raw and gritty. The way it's supposed to be. Funk was the peoples music, played in BBQ joints and dive soul brother bars. It was music aimed directly at the ass. With the exception of George Clinton and a select few, funk went into hiding during the late seventies disco craze. Forward 25 years later, and enthusiasm for the funk phenomenom is stronger than ever.

One look at the cover art for the newly re-issued Turner Bros. album "Act 1," will quickly clue you to the fact that this is no light weight one-track wonder soul album, but rather a sweet and funky long player, brimming with funky bass lines, oo-wee vocals, fat breaks, and afros. Lots of afros. And yes, it was recorded in 1974.

Brought to our attention by DJ Sureshot of the seattle based Sharpshooters, the Turner Bros. album is a highly collectable slab of wax that is so unbeleavably rare, that even hardcore funk collectors are not familiar with it, or may have only heard it rumored to exist. So, Luv N Haight, America's premier jazz, funk, and soul re-issue label comes to the rescue. The album has been given a face-lift by way of re-vamped cover art, and a digital remaster from the original tapes.

Need proof of the booty-juice? Drop the needle (or lazer, whatever the case may be) on "Cause I Love You," and "Sound of the Taurus". Need a funky drum break? Check "Sweetest Thing in the World". It's all there.

Originally from Columbia, South Carolina, the blue print of the Turner Brothers was laid out in 1955 when leader Calvin Turner was but a tot in his family's gospel group, titled The Turner Singers. The Turners relocated to Indianapolis, Indiana in 1963, and local gigging and a strong repuation brought them to the attention of Chess Records, where they released a number of well received doo-wop singles.

Eventually, in an effort to keep up with the times, the Turner Brothers revamped their sound, and at one point they were the biggest soul act out of Indianapolis, having toured with the likes Rufus Thomas, Tavares, Chi-Lites, Ohio Players, and many other major acts in soul music.

"Act 1" was originally released on their own label and was a huge local success, earning the brothers a level of respect that they still receive in Indiana today. Eventually the band disintegrated. Today most of them are preachers and deacons, electricians and accountants. All are flattered that once again their music is being exposed, this time to a new and eager, funk hungry audience. 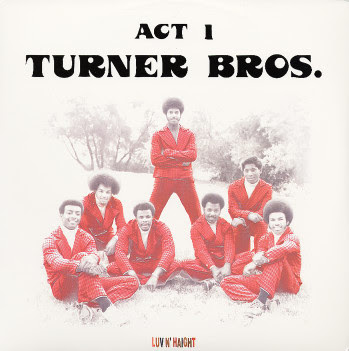 Posted by Keeping Soul Alive at 11:25 AM