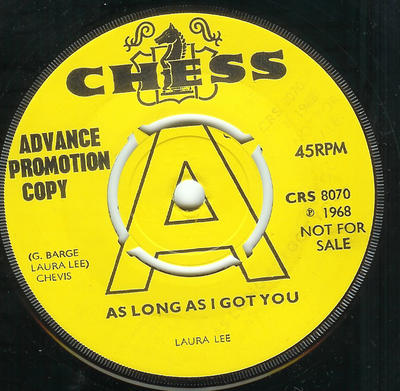 Laura has been a friend of mine since we first met in Memphis in April 2003. My company Keeping Soul Alive brought her over to Europe twice for gigs in 2004 in Sweden and Holland. In recent times, Laura has suffered 2 massive knocks with the death of her long time friend William Weatherspoon and more recently the passing of her cousin Little Milton.

Laura now has a new website and she is busy trying to get more gigs in the Detroit area and elsewhere in the States:-

This is a beautiful looking site and hopefully we will also see the release of her new album which she had just finished with William Weatherspoon before he died.

Later this year Universal will be releasing a collection of Chess sides and hopefully the above 45 will feature on the CD. The CD has been compiled by Lois Wilson of Mojo Magazine and Keeping Soul Alive arranged for her to interview Laura for the CD. I look forward to reading Lois's notes as she is an excellent writer.