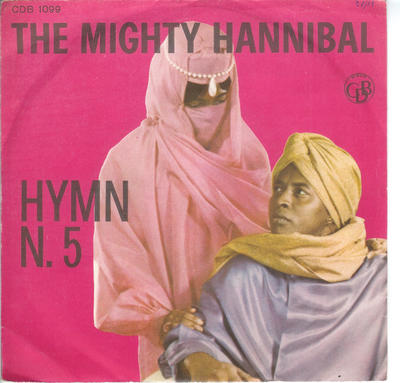 One of the most impassioned anti-Vietnam War songs ever written is Hymn No 5 by the Georgia soul man Mighty Hannibal as he tells of his plight while he dreams in his fox-hole a long way from home.

I picked up the Yugoslavian picture sleeve release from a Belgian dealer at the Utrecht Collectors Fair several years ago. I often wondered why a US soul 45 would come out in a Communist country during the 60's. Then I realised that if you were going to release any soul 45 it might as well be a condemnation of a war against a fellow Communist country North Vietnam!

I once spoke to Mighty Hannibal when he emerged after a long absence in Harlem following the release of his Norton CD Hannibalism. Norton arranged an interview with him which I blew by getting confused that they had invited him down to their offices and I got the wrong date! Then I spent days tracking him down before talking to him but not getting a full interview. I sent him tapes of all his productions by other Georgia artists that he knew such as Lee Moses, Hermon Hitson etc because he had lost so much material over the years. Unfortunately, I never got the chance to meet up with him to do the interview. Then a year or so later, I got real close when he was due to come to Holland for the Utrecht Blues Estafette but he was unable to come over because of passport problems. Since then I have lost touch with him though occasionally he has dropped into a Norton event.

Norton's CD is a great introduction to his music because it has a set of sleeve notes written by the man himself in which he holds back nothing about his drug problems and political activities amongst the many fascinating stories of his life in music. The CD also contains unissued material though it is missing some later cuts and some of his King sides.

The CD is still available from Norton www.nortonrecords.com.

If you want to discover more about Georgia soul then visit either Brian Poust's excellent website www.georgiasoul.com or his new blog www.georgiasoul.blogspot.com
Posted by Keeping Soul Alive at 3:56 PM