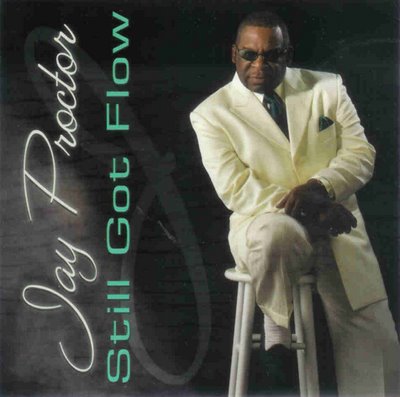 In the last post, I caught up with Jay Proctor the former leader of Jay & The Techniques. One of the best new CDs I picked up in New Jersey was his "Still Got Flow" on Forevermore Records which has only been released in the last few weeks.

Jay told me that he originally agreed a 2 album deal with Chris Biehler of Forevermore Records but he decided that he would only do a 2nd if he recorded his own songs. "Still Got Flow" was the first time that Jay has recorded his own songs; "I never thought I could write! I had tried it a few times but I didn't like what I wrote. So I decided to try again!" Jay was honest in saying that he was long over getting excited about recording and that the drives from his home in Allenstown to the studio in up state New York certainly tested his patience because the album took 2 years to make. However, what did encourage him to continue was being able to sing his own songs.

Jay was inspired by Marvin Gaye to write and I feel he has certainly produced some memorable songs. Mention also must go to Andy Calabrese, who did some lovely arranging and pulled all the musicians together, and Chris Biehler himself who has a restrained production allowing Jay to really breath the music.

Here is my review:-

Got You On My Mind

A strong opener with some memorable chord changes and a catchy melody. Jay lays down a sultry vocal over a strong backing from the singers which has you tapping a long before you know it! His voice has hints of Teddy Pendergast, Jerry Butler but plenty of Jay Proctor! Love the line in this self-penned song where he's having breakfast thinking of his girl; "I pour the syrup on and I think of you!"

Make This Promise To You

An accapella exchange between the singers kicks off the song before it breaks into a very mid-tempo groover and the warmth of Jay's voice hypnotises you into listening to the story of his promise to his woman to love her until she's had enough. Once again this song has some delightful chord changes which keep it flowing and Jay stretches out his vocal as he tells of his passion and how he he would fall down on his knees to make that promise. I believe him!!!

You Make Me Hot

A slower song with a kind of Barry White type rap at the beginning and Jay puts on a husky tone as he describes sitting by the fire with his woman drinking champagne. This is love music and as it picks up the pace once again the backing and the melody make it a strong number. I loved the male backing singers repeating the refrain "I love you - you make me feel good" and "You make me so hot" - very effective! The synth backings don't get in the way allowing the singers space to pour out the emotion and just provide a lovely groove to work over. Jay says to his woman let's play some Marvin Gaye or Marvin Sease and sings a bit of "Let's get It On" - love it!!!!

Touched By An Angel

A fourth self-penned tune which is a simple tune which is slow to start but builds especially after the synth break when Jay let's go and has some good backing especially effective as accapella in the fade out.

When Loves Slips Away

Jay re-records a Jerry Ross penned masterpiece which Jay himself cut on a Smash album back in the 60's. I have always liked this song and Jay does a good cover with some great singing to demonstrate that his voice has matured a lot since his 60's version. Even with the synth backing the song is still strong and the melodies of the backing singers are good as well.

Back to the self-penned numbers and opens with a rap from Jay which puts us in a romantic mood - let's get freaky says it all. Another memorable song which again after several plays really grows on you - love the way Jay holds on the notes and sings as though he is whispering down his woman's ear. Love the way femme singer comes on and tells Jay how good she feels - serious love music for the bedroom!!!! Again the backing singers are spot on with their "Let's Get Freaky"

A more uptempo item with a lovely gurgly backdrop with Jay telling us where he's been over the years with the backing singers singing lines from "Apples, Peaches, Pumpkin Pie" etc. Jay tells us the he still has soul and certainly he still has flow!!! The song breaks down in the middle into a more funky groove. I would think that this would make a good opening song for his show to introduce the audience to his new songs.

The killer cut inspired by his 35 year plus marriage to his wife Elsie. A mid-tempo groover with Jay again getting all sexy while he tells how good his love is with his woman. Love the double tracking of his voice answering himself in the background and those backing singers are again so wonderful. The song has 2 jazzy keyboard breaks before Jay comes back in strong voice and the song just flows beautifully meandering to the climax - love it!

A faster paced self-penned number with a rap from Jay which works over a funky backing.

When I'm Ready For Love

A song written by his manager Rick Levy which is a guitar-led faster side with Jay sounding a bit like Barry White but again he is his own man. Once again the combination of arrangement, melody, backing singers and Jay's interpreation of the lyrics hold the whole thing together.

Baby I Love You

Back to one of Jay's songs - another lovely slow side sounding a bit like a Randy Brown type bag but again this is Jay's stage - the man certainly puts a lot of feeling into his music, his lyrics and singing which all sound so genuine unlike the pretence of some modern music.

I Wanna Make Love To You

Jay ends the CD with one of the classic soul songs which again he does in fine style.

Jay hopes to work up some of the songs and include them in his show to introduce his fans to his new music. He is also currently looking for any opportunity to promote the CD and if anyone is looking in you need to stock this CD! Contact Jay via his website or if you wish to book Jay then do so via his manager Rick Levy.
Posted by Keeping Soul Alive at 10:13 PM