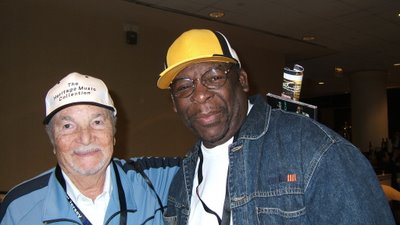 Two people who I had the pleasure of meeting in New Jersey were the producer Jerry Ross and Jay Proctor. Jay Proctor was the lead voice of Jay & The Techniques, one of the first integrated groups in pop music and who had many hits in the 60's including "Apple, Peaches, Pumpkin Pie" and "Baby Make Your Own Sweet Music" for the Mercury subsidiary Smash Records.

Jay came to the 2nd US Soul Trip with his manager Rick Levy who had found out about the "meet and greet" from Kev Roberts who promoted the event. I hit it off straightaway with Jay and Rick and promised to keep in touch with them after the event.

Jay was excited about meeting up with Jerry Ross his old mentor and producer of all those Smash records hits in the 60's. Jay was also excited about the release of his new CD "Still Got Flow" for Forevermore Records

I caught up with Jay after I got back home. Jay's first words to me were; " I really enjoyed the whole thing and I was quite surprised how well versed everyone seemed to be in my music! They actually mentioned songs that I had forgotten that I had recorded - it was a great moment!"

Jay told me that he still lives in Allenstown in Pennsylvania where he formed the original Jay & The Techniques in the early 60's. The group was born when Jay and second vocalist George "Lucky" Lloyd teamed with an all-white band, The Techniques which included Chuck Crowl (bass), Karl Landis (drums), Ronnie Goosley (sax), Jon Walsh (trumpet) and Dante Dancho (lead guitar). Paul Coles, Jr. and Danny Altieri soon replaced Landis and Walsh respectively, while Jack Truett was added on organ.

Jay first hooked up in 1966 in Philadelphia with Jerry Ross who was then on a roll producing and writing hits for Dee Dee Warwick, Bobby Hebb and others for the Mercury label. Jay's first hit was "Apple, Peaches, Pumpkin Pie" on Smash which was a song turned down by Bobby Hebb and which went on to be a million seller. With "Apple, Peaches, Pumpkin Pie" the group found the right mix of soulful pop which appealed to a mass audience in the States and around the world. Denny Randell and Sandy Lizner, out of producer Bob Crewe's stable of writers, supplied "Keep the Ball Rollin' ", the groups successful follow-up. Songs such as "Strawberry Shortcake" and "Baby Make Your Own Sweet Music" were amongst eight 45's issued by Smash between 1966 and 1969. The Smash albums also contain some excellent music and probably demonstrate a more soulful side to the group which shows how the Philly Sound was about to rival the Motown empire.

Jay enthused about his time with Jerry Ross; "I love him! I learnt so much from him. When I was singing "Apple, Peaches, Pumpkin Pie" - I was straight off the street. I didn't know what I was doing. I had never sung in front of a band before. He set me in the studio and I just opened my mouth and sang. I don't know how he did it!!"

I told Jay that when I met Jerry that I found him to be a demure, quiet man who seemed so relaxed but ultra professional. Jay agreed and said that Jerry was always like that but had a quiet determination which always got the job done and brought the best out of people.

Jay told me that the group with different members also had a couple of 45's in the 70's; "I Feel Love Coming On" kicked for Silver Blue label which was picked up by Event Records, which also issued the group's "Number Onederful."

Jay continued in different versions of the Techniques to perform his music and his show is popular on the oldies circuit in the States. However, he did tell me that he not only sings his old hits but puts on a soul show with his 4 piece band covering a range of songs including Sam & Dave, Temptations, Four Tops, Smokey Robinson etc.

We also talked about his solo recordings which are the only music he has released since the 70's. The first album he released was in 1998 called "The Main Course". The album came out after he met the producer Chris Biehler and consists of a number of covers and songs written by others; Jay said "It was an OK album but it wasn't really what I wanted to do." He told me that he really wanted to write his own songs and record them.

We will catch up with Jay again in the next post when I review his new album "Still Got Flow".
Posted by Keeping Soul Alive at 2:35 PM