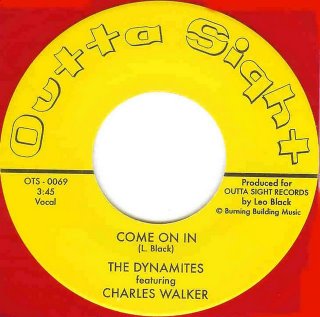 One record I have been meaning to review is the above which was released earlier this year and I discovered through the ever excellent Fryer-Mantis's Funk Forum!!!

Charles has been around for what seems like forever and has re-invented himself several times over the years. He cut some cracking soul 45s in the 60's for Decca etc; for Botanic in the 70's; a 12" See Me in the 80's; before re-emerging in his hometown of Nashville as a soul blues man with the "I'm Available" album produced by my old friend Fred James which re-launched his career in a new direction on the world blues circuit. This led to his critically acclaimed 2nd album with Fred called "Number By Heart" for the Zane label. The success of which led to many tours of Europe with the Mo'Indigo band which he continues to perform with to this day. He has also contributed a vocal on their latest CD called 'The Blues Inside' which is a remake of the 60's Roy Hamilton hit 'You Can Have Her'. Charles will also be appearing in Europe this summer with Mo'Indigo.

However back in the US, Charles has re-invented himself yet again and joined the ever burgeoning funk scene which seems to be growing daily around the world attracting many younger fans to the scene.He has hooked up with a group called The Dynamites who I had never heard of before.

"Come On In" and "Slinky" are heavy funk with plenty of hard-burning energy. Charles really gives the group a nice edge -- and pushes them into Lee Fields/Daptone territory with his cracking vocals which we have come to expect from Charles. The band's mostly vamping behind Charles on both tunes -- but they're nice and tight, and production has a good gritty edge.

I checked out the Dynamite's My Space and this is what they had to say about themselves and hooking up with Charles:-

The Dynamites are 10 pieces of straight-up, badass deep funk and super soul! The band has quickly become a sensation in their hometown of Nashville, Tennessee. Right from their very first gig, a sold-out performance at local showcase club The Basement, The Dynamites began generating Super Soul Excitement with the funkiest band of players imaginable and a front man with the voice and experience to blow the roof off. Charles “Wigg” Walker is a veteran soul man, having recorded many sides in the ‘60s and ‘70s for classic labels like Decca, Champion, and Chess. His recordings as “Little Charles & The Sidewinders” produced a cult following on England’s Northern Soul scene and earned Charles a spot in the footnotes of soul music history, but the man is not ready to rest on his past achievements. Having seen a resurgence of interest in his career thanks to inclusion on the second volume of the “Night Train To Nashville” collections of Nashville-based soul and R&B from back in the day (released in 2005 on Universal/Lost Highway), Charles began performing live in the Nashville area again which brought him to the attention of a hungry young band leader looking for an authentic voice to front a new funk band project. Bill Elder (aka Leo Black) had the concept for a funk and soul revue brewing in the back of his mind for a long time. Over a two year period, the band slowly coalesced around Bill, with only the front man spot as the final missing piece. Enter Charles Walker and The Dynamites were born! Taking the stage at their debut gig, the 9-piece band plus super soul singer “blew the roof off... fully earning the implications of their name” claimed alt.weekly The Nashville Scene in their review of the show. Having stated in an earlier interview that he was a better singer now than when he was younger, Charles proceeded to back up his claim with a performance that ”work(ed) us up with his impassioned belting before bringing the band way down to explore the quieter subtleties of his rich voice” according to the Scene’s review. And here’s what the paper had to say about the players: ”Though it was their first show, the band laid down some impressively nasty grooves and sounded as well-greased as if they’d just come off 10 weeks on the Chitlin’ Circuit.” Having earned their status as Nashville’s premier funk & soul revue with their first show, The Dynamites proceeded to get their super soul sound down on wax. The Dynamites have only been a working entity for a few months and they’ve already cut their debut single, “Come On In” b/w “Slinky”, a smokin’ hot 45 released on 7 inches of flaming red vinyl from the Outta Sight label (both songs are also available from iTunes). The two tunes are bold and blazing and serve as a righteous calling card for this band who have every intention of taking their special brand of Deep Funk and Super Soul to fans of authentic, heavy-hitting music everywhere.

Drop by the Dynamite's blog because you can find out their gig details for the next couple of months.

Also check out Ibiblio Org's site for a wonderful slide show of the band in action.

Also to get an idea of their show drop by Memphis Flyer's recent review of the band's show.

Oh yeah! You can get the 45 from a variety of sources - try Dusty Groove or Jazzman Records
Posted by Keeping Soul Alive at 1:41 PM