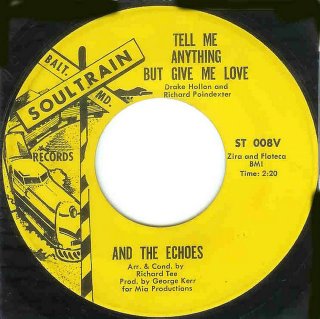 Back with another Richard Poindexter written song which I accidently stumbled on while scouring Ebay. I was intrigued by the writing credits plus you know before you hear the song that with George Kerr and Richart Tee on board then you are in for a treat. The sound clip on the "buy now" confirmed what I anticipated!

When I got the 45 and heard the vocal more clearly I immediatedly thought it sounded like Richard himself - I still need to confirm that with him. Both sides are Motownesque dancers circa late 60's with a sound like The Four Tops meets The Originals which is no bad thing but they are distinctive enough to stand up by themselves. The more I play them the more I like the catchy light production.

The Soul Train label is out of Baltimore which we sometimes forget was quite a soulful place back in the 60's. Kenny Hamber who I also met in New Jersey filled me in on a lot of things about his home town music scene.

By coincidence, after ordering the 45, I read a review of the 45 in the latest issue of Soul Up North by Shirley Stewart. Interestingly, she also featured a second 45 on the Soul Train label by a group called The Collection And The Civics though Richard was not on the writing credits this time.

I will ask Richard and Kenny whether they can shed any further light on the releases and the label.
Posted by Keeping Soul Alive at 4:24 PM