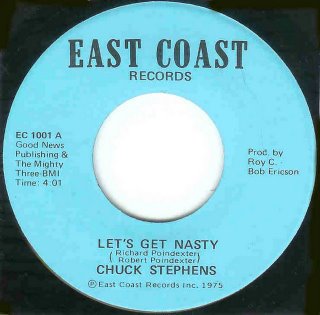 It's funny how sometimes things come together and soul mysteries are solved are further riddles ensue when you start to make connections! This is why my friend Red Kelly started Soul Detective.

Recently, I was reading a magazine in which someone mentioned the Chuck Stephens side. I thought "I must play that - I haven't heard it in years and I always loved it!!!" So the first thing that struck me was that I had completely forgotten that "Let's Get Nasty" was written by Richard Poindexter who I had met in New Jersey and I hope to interview in depth at some later stage. Richard is best known for his writing for Linda Jones and The Persuaders amongst others but his songs have been recorded by a host of people. Richard penned many songs which were recorded in NY which I presume was where "Let's Get Nasty" was recorded.

The next connection was that both sides are produced by Roy C and the other side written by the man himself "Girl, I Want To Make Love To You" is pure Mr Hammond with his usual lilting sexy style groove. Then I thought that guitar sounds familiar - it must by James Hines!!! James Hines was the subject of the 3rd Soul Detective case and another connection falls into place.

So you start off with a 45 which I bought nearly 30 years ago because it was a groovy kind of side which received a few spins on the UK rare soul scene and discover connections you had never dreamt of!!!!

Chuck Stephens did have a least another 2 45's:-

I haven't got the Leo Mini 45 but while doing some research on the label I turned some interesting stuff up - only problem is that I could do with hearing the 45's!!!!