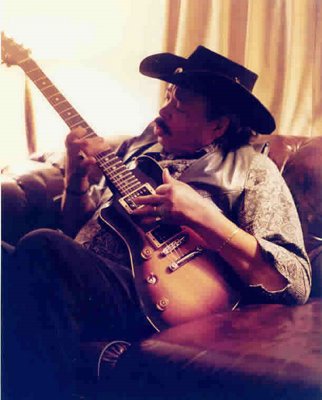 Johnny Jenkins During Capricorn Sessions in Early 70's
I've dragged my feet on mentioning Johnny's death on my blog - you know this year has been a bad one with so many people passing that sometimes to be honest I hate writing obituaries!!!! In saying that, I think it is important to recognise the loss and celebrate artist's past lives. I have also received messages from Freddie Gorman's and Joe Weaver's families after celebrating their lives on this blog. I think that soul fan's recognition can give some artist's families some comfort that their loved ones will not be forgotten.
Johnny hailed from Macon, Georgia and my friend Brian Poust has an excellent short post on his Georgia Soul blog on Johnny so please drop over there and check it out.
The Macon Telegraph also had a fine obituary on Johnny which is worth reading.
Johnny is best remembered for his very early work with Otis Redding but probably his finest moment was the cutting of the "Ton Ton Macoute" album for Capricorn in 1970.
However, don't forget that Johnny did make a come back with his old mentor Alan Walden in 1997 called "Blessed Blues." and continued to perform sporadically, including a 2000 show at the Georgia Music Hall of Fame.
His last two albums, "Handle with Care" (2001) and "All in Good Time" (2003), were produced by Mean Old World Records and are still available from Amazon or CD Baby plus his Capricorn album is also available on CD.
Johnny had a unique style which doesn't quite fit into the mainstream of soul but he certainly influenced many people including Hendrix with his guitar style and has an important role in the development of soul music.
Posted by Keeping Soul Alive at 5:38 PM