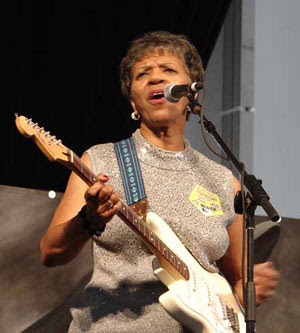 Great to see this video webcast made available from one of my all time favourite artists - Barbara Lynn!!

Barbara Lynn is a rhythm and blues singer and left-handed guitarist from Texas. In the 1950s, inspired by blues artists Guitar Slim and Jimmy Reed, and pop acts Elvis Presley and Brenda Lee, she created an all-female band, Bobbie Lynn and Her Idols. Her first single "You'll Lose a Good Thing" was a #1 R&B hit and a Top 10 pop hit in 1962, and was later a country hit for Freddy Fender. Soon Lynn was touring with such soul music greats as Gladys Knight, Stevie Wonder, Smokey Robinson, Dionne Warwick, Sam Cooke, Otis Redding, James Brown, Marvin Gaye, Ike and Tina Turner, and The Temptations. She appeared at the Apollo Theatre and twice on American Bandstand, and her song, "Oh Baby (We've Got a Good Thing Goin')” was recorded by The Rolling Stones. Rolling Stone's David Fricke has noted that Lynn continues to display “undiminished grace and poise, pouring a lifetime of blues and wisdom into her delivery." Kennedy Center

Also check out this video about her career which I recently came across on You Tube: