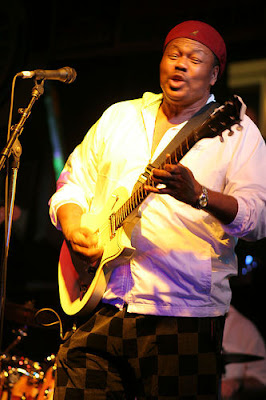 I was sad to hear of Johnny Jones's death. Tonight, there is a tribute to the man in Nashville by some of his friends:

Longtime Nashville guitar hero and Hendrix mentor Jones died earlier this month; Church talked then of his hope to arrange a tribute show in place of a traditional funeral.

"He didn't want a funeral," Church said. "He didn't believe in them. ... I'd like to have a celebration of his life at the Place with all of his friends and fellow musicians."

Other friends and fellow musicians scheduled to join in tribute to the musician, who was a figure on the Jefferson Street blues scene here in Nashville in the 1960s and continued playing through the last year of his life: Doc Blakey, Tina Brown, Clifford Curry, the Dynamic Five, Earl Gaines, Gorgeous George, Herbert Hunter, Rufus Hunter, Marion James, Les Kerr, John Richards, Tyrone Smith, the Valentines and White Chocolate.

The Jimmy Church band will serve as the house band for the event, and the stage will be open to any attendees who'd like to share their own remarks and/or music.

“A Tribute to the Legend – Johnny Jones” will kick off at 6 p.m., and admission is free; donations are welcome, and will go toward establishing a scholarship in Jones' name. The Place is located at 217 Second Ave. S.

Tennessean.com
Posted by Keeping Soul Alive at 11:18 AM