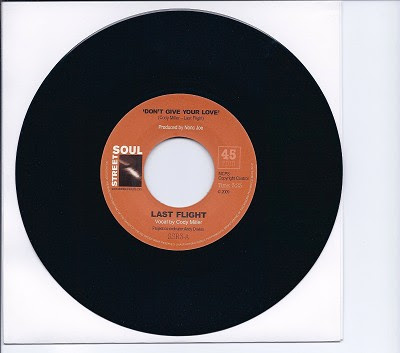 My mate Andy Davies has been in touch to tell about the latest release on his Street Soul label:

Our latest release is the Ultra Rare 70's soul tune by Last Flight "Don't Give Your Love" b/w the sought after Funk b side "Shady Lady" Released on October 23rd 2009.

Take a listen over on the Street Soul site.

A fine addition to his catalogue - don't forget to take a listen to the other releases on the label from Jerline & Friends and Patrick Henry.
Posted by Keeping Soul Alive at 10:09 AM