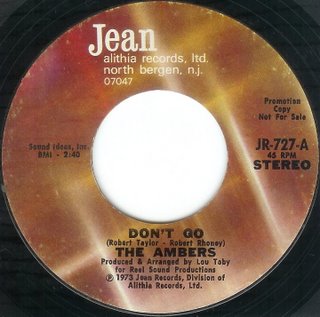 
I have stated before my love of harmony groups especially those from New Jersey such The Escorts, The Moments etc. Another one of those groups who have an excellent if small output are The Ambers.

The Ambers recorded between 1965 and 1974 though I don't know there origins or when they broke up or what happened to any of the members since 1974. The group consisted of Robert Rhoney on tenor and lead, William "Billy" Chin on tenor and lead, Robert Taylor on baritone, Ozzie Beck on bass and lead and Jerry White.

My first introduction to the group was via the dancefloor with their Northern Soul favourites "I Love You Baby" and "Potion Of Love". However, it was via the pages of the long defunct UK magazine Black Music that I discovered their Jean 45s. Back in 1974/75, UK DJ and collector Ian Levine used to have a column called Rare Soul and he mentioned the Jean 45 "Don't Go". At that time, any recommendation by Ian Levine was a must have and as a fairly new release the Jean 45 was pretty easy to find. It has always reamined a favourite with me but I must admit their Verve side "Now I'm In Trouble" is a killer and their 45 which I like the most.

The conga driven backing is like a cross between Norman Whitfield Temptations track and early Ohio Players. The b-side of the 45 is the instrumental and you can hear the backing track to ful effect. However, the exchange of harmonies and the intensity of the singing is what appeals to me as well as the subtle changes of tempo.