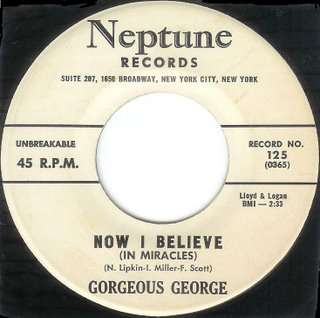 I am presuming the above is the first or one of the first releases by the same Gorgeous George who recorded for Stax, Peachtree and Homark. This track as you can hear is very early 60's and is that Freddie Scott on writing credits? George wrote the B-side ballad "Will You Love Me".

I don't know much about Gorgeous George whose real name was Theodopholous Odell George who was actually a MC on the R&B circuit in the 60's and apparently had a hilarious act! According to Rob Bowman's notes for the first box set of Stax 45s, he had been a valet for Hank Ballard and used to make all his own clothes.

In the past, William Bell told me in 2002 that George was still activate and Jimmy Church confirmed that when I met him in 2003. I cannot recall anyone actually interviewing him but I may be mistaken.

The Neptune 45 has never been out on CD as far as I know and the Stax killer deep soul side "Biggest Fool In Town" is on the first box set and has a ppeared on a bootleg CD as well. Grapevine Records in the UK released 2 Peachtree outings; the unissued "You Can't Stop A Woman" and the in demand "It's Not A Hurting Thing" on their compilation of the label. His Homark 45 "Strange Book" has also become highly collectable on the rare soul scene in the UK after the instrumental side initially got plays at the Blackpool Mecca as a new release back in 1975.

I've had a stab at a discography below: