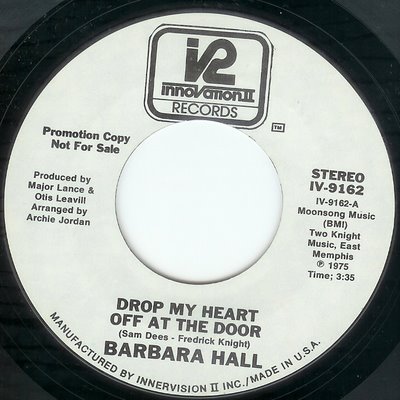 I had confirmation this AM from Hermon Hitson that the Atlanta soulstress Barbara Hall sadly died last Friday.

I don't know any details of the circumstances of her death nor do I know much about her life except the few wonderful songs she has left us. Earlier this year, her name had cropped up in conversations with Freddie Terrell when he told me about working with Major Lance on her Innovation 11 45's. I had planned to try and interview her but it never came about and another life history of one of the stars we cherish may have slipped by.

Her sister is Sandra Hall who is very well known on the US Blues circuit as well as being a regular visitor to Europe. They sang together in the 60's as teenagers in a group called the Soul Sisters.

Barbara leaves us with one of the classic deep sides of the 70's - the immaculate Sam Dees/Frederick Knight penned "Drop My Heart Off At The Door". Flip the 45 over and you find another Sam Dees gem in the form of the uptempo "You Brought It On Yourself". She also recorded another earlier Innovation 11 45 with Major Lance - "Can I Count On You" - a very soulful midtempo side backed by the strident Invictus styled "VIP" which was my introduction to the lady back on the dance floors of the mid 70's. "VIP" was a side which will always remind me of my friend John Clement and our post-weekend music playing sessions round at his house in Meols, Wirral - where we would play our latest buys following the previous weekend's all-nighters or all-dayers memories!!!!

Barbara also recorded a 60's self-penned deep opus entitled "Broken Hearted" for the small Atlanta label Tuska. You can catch this side on John Ridley's page on Yoni's Soul Of The Net site.

Barbara Hall RIP and thanks for the musical memories