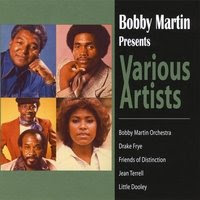 You can pick up a new CD featuring tracks by Friends Of Distinction, Jean Terrell, Little Dooley etc - all produced by the legendary Bobby Martin at CD Baby:

Bobby Martin, artist, arranger and producer, has become a major force in the music industry.His contributions to the success of The Sound Of Philadelphia is legendary.
As an artist, Bobby Martin's success is that of Philadelphia's "MFSB", "B" as in Bobby and the sound that made him a Grammy Award Winner and recipient of many gold records.

Once again, his Philadelphia family of musicians provides the basis for the new Bobby Martin project.

The Friends Of Distinction -Rolling Stone called their music "Something Priceless" but the public paid the price and gave Gold record status to The Friends Of Distinction, Floyd Butler and Harry Elston for such hits as "Grazin' In The Grass", "Goin' In Circles" and "Love or Let Me Be Lonely" and an international audience came to know them through their highly acclaimed television, concert and club appearances all over the world.

Jean Terrell, the dynamic vocalist who as lead singer carried the famed "Supremes" through seven major hit singles before motherhood brought about a hiatus, returns to the recording world and the public eye, still a supreme talent, with an exciting new future and recording career through producer Bobby Martin.

A Bobby Martin discovery, Drake Frye is a new artist at the neginning of an important recording career. In addition to the two songs he sings on this CD, Drake is the writer of "I Hear Love Drummin' A Beat" and "Captain Of A Sinking Ship".
His extensive background in writing, arranging and record production, as well as performing, makes him a most exciting artist.

Little Dooley is a wonderful singer. He did a great job on both of these songs. He always connects with his audience.

For this release, Bobby Martin sought out the Legendary Mixer, Tom Moulton and asked him to remix and re-master these incredible recordings. Tom jumped at the opportunity to work with one of the masters and what you hear is the result of a labor of love and respect for the music.